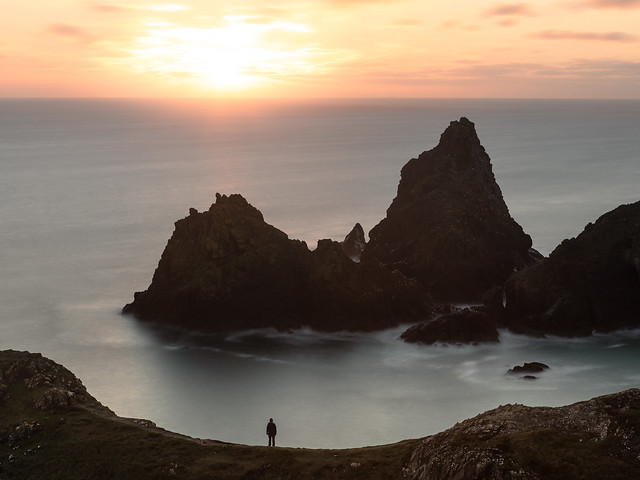 Continental Kynance
For a moment I was puzzled by the information that my PhotoPills app was trying to share with me. How in the middle of January could sunset be on the far side of 5:45pm, and how could the blue hour extend to well beyond six o clock? I stared blankly at my phone, perplexed by the impossibility of what I was being told, only to notice that it was telling me that we were already past five. The previous day it had been more or less dark by this time, yet the yellow sun hung steadfastly in the sky above the jumbled assembly of sea stacks at Kynance Cove. And then a thought occurred to me. Somewhere between here and the brow of the slope above us it seemed we’d slipped into continental time, or at least the technology we carry around with us in our pockets thought we had. A glance at the analogue watch on my wrist confirmed that I hadn’t gone mad and it really was only a few minutes past four; a glance at the clock on the phone revealed the banner “Central European Time.” Minutes later we returned to the top of the slope and discovered we were back in England with the lost hour restored, to be used as we saw fit. At this point, scarcely a mile from the southernmost tip of the UK mainland, it seems that things often become confused by geography, yet a cursory inspection of the map reminds me that London is closer to Calais than Lizard Point is to the coast of Brittany. Indeed, all along the south coast lie towns and villages with fewer miles between them and our friends at the peripheries of France than we have here. So I’m intrigued; if you’re in one of those south coast resorts, do your phones lose all sense of which country they’re in when it comes to telling the time?

Our visit to Kynance Cove was another long overdue return, delayed by a week of rotten weather which had found us mostly hiding indoors and waiting for some sort of sky to feast our cameras upon, and for some sort of light to bring texture and contrast to the land before us. It was also an opportunity to give our campervan a run; after all there’s nothing quite like making a cup of coffee in your own mobile kitchen to accompany the fried eggs and baked beans on toast. Obviously, it would be better if the toast were a bit more like toast, but the onboard grill has its limitations, so you get the picture. For a couple of years my daughter worked for the National Trust, making sure everything ran to order in the car park here, and reporting via the family Whatsapp group almost daily on the huge numbers of vehicles that would arrive during the summer months and need to be crammed into tight spaces with the aid of a crowbar, so it felt all the more rewarding to arrive and park easily in an empty space on a sunny Thursday afternoon in January. With few people around there was plenty of room to sprawl ourselves extravagantly and enjoy being outdoors, and wrapped in multiple layers as we were, it was enough to sit on the clifftop with our faces inclined towards the sun, drinking in those rare and windless rays of winter, dreaming of the summer that always seems so impossibly far away when it’s only a week since the Christmas decorations were taken down and put back in the loft for another year. It’s at moments like these that we pause idly upon those future plans and look forward to the time when the dreams will be turned into everlasting memories. They start quite soon in fact, with a first sally abroad in more than two years, ironically to Portugal, one of those rare European countries that sits in our time zone. Let’s see what our phones have to say about that when we land at Funchal towards the back end of next month.

The last time I’d been here had brought an especially memorable sunset, when sunbeams burst forth from behind darkening clouds and painted the sky with a patchwork of bright streaks of yellow and gold. By sunset I’d been alone that day, and as I took my final shots I made a mental note that just one additional ingredient would make such a significant change to the scene in front of me. I could have adopted the pose myself, but not without risk to my camera, which was perched far too close to the edge of the cliff to be left unaccompanied. The great thing about Ali is that she provides her modelling services free of charge, and is enormously patient; a good thing in itself as she had to spend almost half an hour standing in this spot gazing towards the west while I tried to eliminate the flare from the sun by partially covering the lens and repeatedly failing. The series of raw files is interspersed with shots that have parts of my hand in the top left hand corner of the frame, but try as I might, I wasn’t happy with the results. And then finally as the glare departed, I tried a single long exposure of thirty seconds. She was too far away to shout instructions to, and there was no signal to call her with on my temporarily French phone, and with half a second to go she moved her left arm towards her head, but it mattered not. As she so often does, she’d read my mind and managed to keep completely still for long enough to make the image work, and I’d captured that picture that had come into my mind when I’d stood here fifteen months earlier. The sky wasn’t quite as spectacular this time, but it was still pleasing enough to record the mood of that happy moment. I hollered down to the ledge and produced the agreed signal that I was done, and she was released from her duties and allowed to return to the van and put the kettle on. I tried a couple more long exposures to smooth the sky, but in truth I knew I’d got the shot I wanted, and on the back of the camera it looked promising. It seemed as if the regained hour had been used well. In fact, I think this one may well end up on the wall at home.

Back at the van I sipped my tea and smiled as the darkness crept in and enveloped the world in shadows, leaving just a receding orange band of fire on the horizon. After all, moments like these are made to be enjoyed with a cup of tea and the knowledge that the picture you’d hoped for is safely stored on two separate cards in the camera bag right next to you. It just doesn't seem to happen that often. Photography would be too easy if it did.