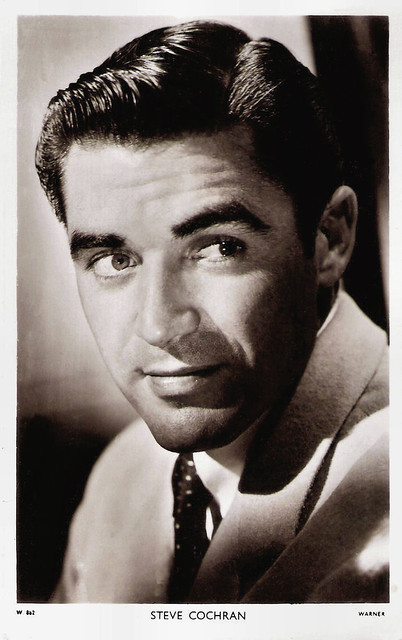 Husky, darkly handsome Steve Cochran (1917- 1965) was an American film, television and stage actor, who often played boxers and gangsters during the 1940s and 1950s. One of his best known roles is the troubled drifter in Michelangelo Antonioni's Il Grido (1957), produced in Italy.

Steve Cochran was born Robert Alexander Cochran in Eureka, California, in 1917. He grew up in Laramie, Wyoming, the son of a logger. While he appeared in high school plays, he spent more time delving into athletics, particularly shooting hoops. After stints as a cowpuncher and railroad station hand, he studied at the University of Wyoming, where he also played basketball. Impulsively, he quit college in 1937 and decided to go straight to Hollywood to become a star. Working as a carpenter and department store detective during his early days, he gained experience appearing in summer stock. In the early 1940s he was given the chance to work with the Shakespeare Festival in Carmel. There he played Orsino in Twelfth Night, Malcolm in Macbeth, Horatio in Hamlet" and the title role of Richard III. He made his Broadway debut in Broken Hearts on Broadway (1944) and then went on to appear almost immediately in Hickory Stick. In 1945, he landed a contract with Samuel Goldwyn. His debut was Wonder Man (H. Bruce Humberstone, 1945) with Virginia Mayo and Danny Kaye. The following years, he appeared in several films, including the Film Noir The Chase (Arthur Ripley, 1946), the war classic The Best Years of Our Lives (William Wyler, 1946) as Virginia Mayo's extra-marital fling, and A Song Is Born (Howard Hawks, 1948). Following a notable stint as Mae West's leading stud in her 1949 revival of Diamond Lil on Broadway, Cochran was picked up by Warner Bros. From 1949 till 1952 Cochran often played boxers and gangsters for Warner. One of his most memorable roles was as psychotic mobster James Cagney’s power-hungry henchman, Big Ed Somers, in the gangster classic White Heat (Raoul Walsh, 1949). He also appeared in Highway 301 (Andrew L. Stone, 1950), as Joan Crawford's gangster paramour in The Damned Don't Cry! (Vincent Sherman, 1950), and Inside the Walls of Folsom Prison (Crane Wilbur, 1951), which inspired Johnny Cash to write his song Folsom Prison Blues. Gary Brumburgh at IMDb: “Cochran was all man -- and a slick ladies' guy to boot. They didn't come much rougher and tougher than he both off- and on-camera. Throughout post-WWII Hollywood and the 1950s, he played the swarthiest and sexiest of coldhearted villains, with mustache or without, in a few films now considered classics. What Cochran perhaps lacked in the Gable charisma department, he certainly made up for with his own raw magnetism and sexy virility.“

In 1953 Steve Cochran formed his own production company, Robert Alexander Productions. He won critical acclaim for two of his performances in his company's films. Cochran played a disgraced, alcoholic itinerant farmer struggling to regain the love of his family in Come Next Spring (R.G. Springsteen, 1956), and a troubled drifter in Michelangelo Antonioni's Il Grido/The Outcry (1957), produced in Italy and co-starring Alida Valli. Cochran starred in a string of B movies throughout the 1950s, including Carnival Story (Kurt Neumann, 1954), Private Hell 36 (Don Siegel, 1954) and the British thriller The Weapon (Val Guest, 1956). He also appeared in episodes of popular television series of the era, such as The Twilight Zone (1959) and The Untouchables (1960-1961). In the early 1960s, Cochran appeared in the Western The Deadly Companions (Sam Peckinpah, 1961) with Maureen O’Hara, and the drama Of Love and Desire (Richard Rush, 1963) starring Merle Oberon, but his career had begun a final downslide. His production company attempted to make some television series and other films, but they were never produced with the exception of a television pilot where he played John C. Fremont in Fremont the Trailblazer. A prime candidate for numerous arrests for his impulsive carousing and brawling, his living hard in the fast lane began to take its toll. His last years were marred by an obligatory Errol Flynn-type ending of drinking and debauchery. He began looking bloated and weighty. Cochran's final films were the British crime drama Mozambique (Robert Lynn, 1964) with Hildegard Knef, and the romantic drama Tell Me in the Sunlight (1965), which he had directed himself and was not released in the U.S. until 1967. Steve Cochran was a notorious womanizer and attracted tabloid attention for his tumultuous private life, which included well-documented affairs with numerous starlets and actresses. Mamie Van Doren later wrote about their sex life in graphic detail in her autobiography Playing the Field: My Story (1987). He was married and divorced three times, and to artist Florence Lockwood, actress Fay McKenzie, and 19-year-old Danish émigré Hedda Jenna Jensen. He had one daughter, Xandra, by Lockwood. Cochran was the grandfather of film and television producer Alex Johns. In 1965, Cochran died on his yacht off the coast of Guatemala, reportedly due to an acute lung infection. His body, along with three female assistants, remained aboard for ten days since the three women did not know how to operate the boat. It drifted to shore in Port Champerico, Guatemala, and was found by authorities. According to Wikipedia, there were various rumours of foul play and poisoning, but reportedly no new evidence was found. Steve Cochran was 48. 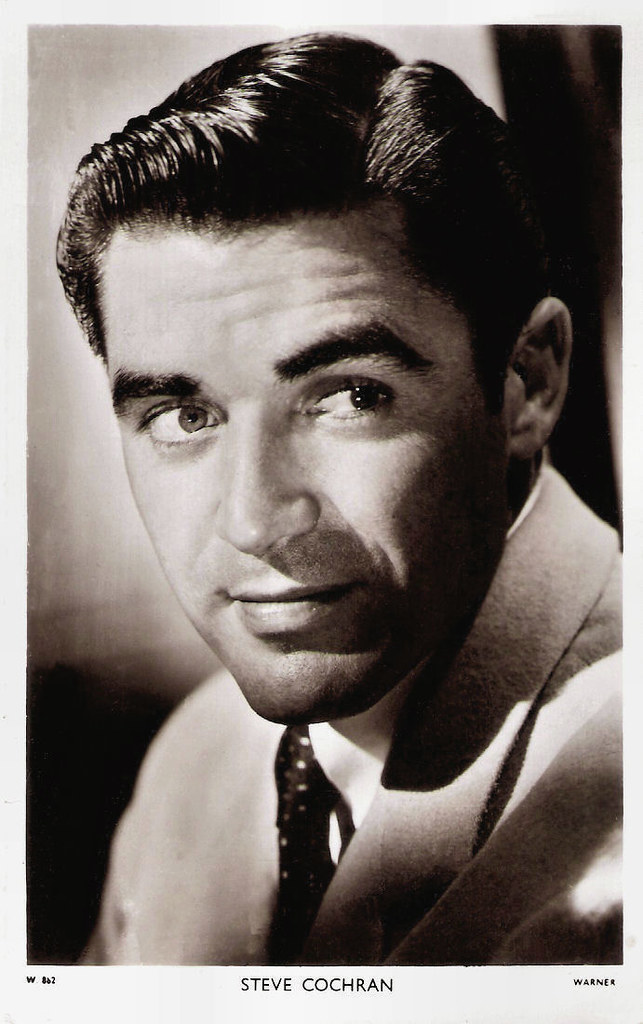