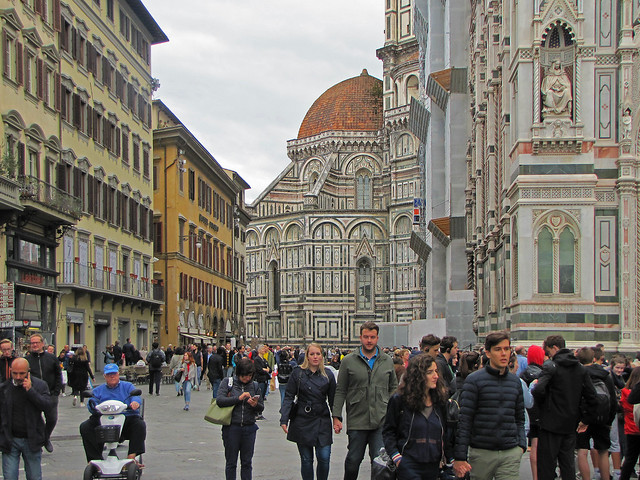 The Cattedrale di Santa Maria del Fiore was begun in 1296 in the Gothic style to a design of Arnolfo di Cambio and was structurally completed by 1436, with the dome designed by Filippo Brunelleschi. The exterior of the basilica is faced with polychrome marble panels in various shades of green and pink, bordered by white. The cathedral complex in Piazza del Duomo includes the Baptistery and Giotto's Campanile. These three buildings are one of the major tourist attractions of Tuscany and part of the UNESCO World Heritage Site covering the historic centre of Florence. The basilica is one of Italy's largest churches, and until the development of new structural materials in the modern era, the dome was the largest in the world. It still remains the largest brick dome ever constructed.

After the cathedral’s nave had been finished by 1380, only the dome remained incomplete. On 18th August 1418, an architectural design competition was announced for erecting the dome. The two main competitors were two master goldsmiths, Lorenzo Ghiberti and Filippo Brunelleschi, the latter of whom was supported by Cosimo de Medici. Ghiberti had been the winner of a competition for a pair of bronze doors for the Baptistery in 1401 and lifelong competition between the two remained sharp. Brunelleschi won and received the commission. Work on the dome started in 1420 and was completed in 1436. The cathedral was consecrated by Pope Eugene IV on 25th March 1436, (the first day of the year according to the Florentine calendar). It was the first "octagonal" dome in history to be built without a temporary wooden supporting frame. And it was and still is one of the most impressive architectural projects of the Renaissance.

With about 400,000 residents in its city centre and more than 1,520,000 in its metropolitan area, Florence is the capital and also the most populous city of the Italian region of Tuscany. The town lies in a basin formed by several hills. The Arno river, three other minor rivers and some streams flow through its metropolitan area. During the Middle Ages the city was a centre of European trade and finance and one of the wealthiest cities of that era. It is also considered the birthplace of the Renaissance, and has been called "the Athens of the Middle Ages". A turbulent political history includes periods of rule by the powerful Medici family and numerous religious and republican revolutions. From 1865 to 1871 Florence was the capital of the recently established Kingdom of Italy.

The Florentine dialect forms the base of Standard Italian and it became the language of culture throughout Italy due to the prestige of the masterpieces by Dante Alighieri, Petrarch, Giovanni Boccaccio, Niccolò Machiavelli and Francesco Guicciardini, who were all born in the city. Florence attracts millions of tourists each year, and its historic centre was declared a UNESCO World Heritage Site in 1982. The city is noted for its culture, art, architecture and monuments. It contains numerous museums and art galleries, such as the Uffizi Gallery and the Palazzo Pitti. Due to Florence's artistic and architectural heritage, it has been ranked by Forbes as one of the most beautiful cities in the world. Furthermore, Florence is also an important city in Italian fashion, being ranked in the top 15 fashion capitals of the world.

Florence originated as a Roman city. Around 200 BC, the Etruscans initially formed the small settlement of Fiesole, which was destroyed by Lucius Cornelius Sulla in 80 BC in reprisal for supporting the populares faction in Rome. In 59 BC, the present city of Florence was established by Julius Caesar as a settlement for his veteran soldiers. Originally it was named Fluentia, owing to the fact that it was built between two rivers, but its name was later changed to Florentia (in English: "flowering"). Situated along the Via Cassia, the main route between Rome and the north, and within the fertile valley of the Arno, the settlement quickly became an important commercial centre.

In centuries to come, the city was often troubled by warfare between the Ostrogoths and the Byzantines, which may have caused the population to fall to as few as 1,000 people. Peace returned under Lombard rule in the 6th century. In 774, Florence was conquered by Charlemagne and became part of the Duchy of Tuscany, with Lucca as its capital. The population began to grow again and commerce prospered.

Margrave Hugo chose Florence as his residency instead of Lucca at about 1000 AD. The Golden Age of Florentine art began around this time. The city's primary resource was the Arno river, providing power and access for the industry (mainly textile industry), and access to the Mediterranean Sea for international trade. Another great source of strength was its industrious merchant community. The Florentine merchant banking skills became recognised in Europe after they brought decisive financial innovation to medieval fairs, such as bill of exchange and double-entry bookkeeping system.

In 1115, the Republic of Florence originated, when the Florentine people rebelled against the Margraviate of Tuscany upon the death of Matilda of Tuscany, a woman who controlled vast territories that included Florence. The Florentines formed a commune in her successors' place. Subsequently, the early, modern state of the republic was ruled by a council known as the Signoria of Florence. The republic had a checkered history of factions and counter-factions. But in 1434, the Medici faction gained governance of the city under Cosimo de' Medici.

During this first Medici governance, in 1469, Cosimo’s grandson Lorenzo de' Medici assumed the reins of government. Lorenzo was a great patron of the arts, commissioning works by Michelangelo, Leonardo da Vinci and Botticelli. As he was also an accomplished poet and musician himself, he brought composers and singers to Florence too. By contemporary Florentines (and since), he was known as "Lorenzo il Magnifico" (in English: "Lorenzo the Magnificent").

The Medici kept control of Florence until 1494, when Lorenzo’s son Piero II was expelled by the French king Charles VIII, whose army had invaded northern Italy. In 1498, when the Medici were out of power, Niccolò Machiavelli, a diplomat, politician, historian, philosopher, humanist, writer, playwright and poet of the Renaissance period, became secretary to the Second Chancery of the Republic of Florence. His prescriptions for Florence's regeneration under strong leadership have often been seen as a legitimisation of political expediency and even malpractice. In other words, Machiavelli was a political thinker, perhaps most renowned for his political handbook, titled "The Prince", which is about ruling and the exercise of power. Commissioned by the Medici, Machiavelli also wrote the Florentine Histories, the history of the city.

In 1512, Giovanni de' Medici (later Pope Leo X) re-conquered the Republic of Florence. However, Florence repudiated Medici authority for a second time in 1527, during the so-called War of the League of Cognac. But again the Medici re-assumed their rule in 1531 after an 11-month siege of the city. The republican government was disestablished in 1532, when Pope Clement VII appointed Alessandro de' Medici "Duke of the Florentine Republic", making the republic a hereditary monarchy.

In 1569, the Medici became Grand Dukes of Tuscany, ruling for another two centuries. In all Tuscany, only the Republic of Lucca and the Principality of Piombino were independent from Florence. The extinction of the Medici dynasty and the accession in 1737 of Francis Stephen, Duke of Lorraine and husband of Maria Theresa of Austria, led to Tuscany's temporary inclusion in the territories of the Austrian crown. From 1801 to 1807 Florence was the capital of the Napoleonic client state Kingdom of Etruria and from 1808 to the fall of Napoleon in 1814, it was the was the prefecture of the French département of Arno. In 1861, Tuscany became a region of the Kingdom of Italy. In 1865, Florence replaced Turin as Italy's capital, but already six years later, it was superseded by Rome.

After doubling during the 19th century, Florence's population was to triple in the 20th, resulting from growth in tourism, trade, financial services and industry. During World War II the city experienced a year-long German occupation (1943 to 1944) and was declared an open city in late July 1944 as troops of the British 8th Army closed in. The retreating Germans decided to demolish all the bridges along the Arno, making it difficult for troops of the 8th Army to cross. But at the latest moment, the German general was convinced that Ponte Vecchio was not to be destroyed due to its historical value. In November 1966, the Arno flooded parts of the centre, damaging many art treasures.

Today, Florence is known as the "cradle of the Renaissance" for its many Renaissance monuments, churches, and other buildings. 600 years after its completion, the dome, built by Filippo Brunelleschi, is still the largest dome built in brick and mortar in the world. Florence also contains numerous museums and art galleries where some of the world's most important works of art are held. Hence, tourism is, by far, the most important of all industries and most of the Florentine economy relies on the money generated by international arrivals and students studying in the city. The value tourism to the city totalled some 62.5 billion € in 2015 and the number of visitors still increases to the present day.
© All Rights Reserved
Taken in: Italy / Tuscany / Florence / Centro Storico  (show maphide map)
Tags: more » « less
Sets appears in:   more » « less
Groups appears in:   • Italy    • Photographs of Italy    more » • Tuscany / Toscana    • European Vacation    • UNESCO World Heritage Sites    • bella italia!!    • Toscana    • Cities of Europe    • Italy, Best of / L'immagine dell'Italia    • Italy .    • ANTICANDO!!!(P1/Aw3)    • Streets and roads of the world INV ONLY !!! 1 Post / 3 Awards !!    • "History & Antiquities (Post 5 - Award 3)"    • Historical and architectural gems    • Baugeschichte "History of Architecture"    • City of the World (Post 6 & Comment 3 Please) NEW    • Strictly GeoTagged    • The concept is Europe    • buildings are beautiful    • ITALIA - ITALY - ITALIE - ITALIEN    • PLANET EARTH BACK IN THE DAY    « less
Camera: Canon PowerShot SX20 IS, f/3.5, 1/320 sec, 9.2mm, ISO 160 (more info) (hide info)
Stats: 17,402 views / 16 comments 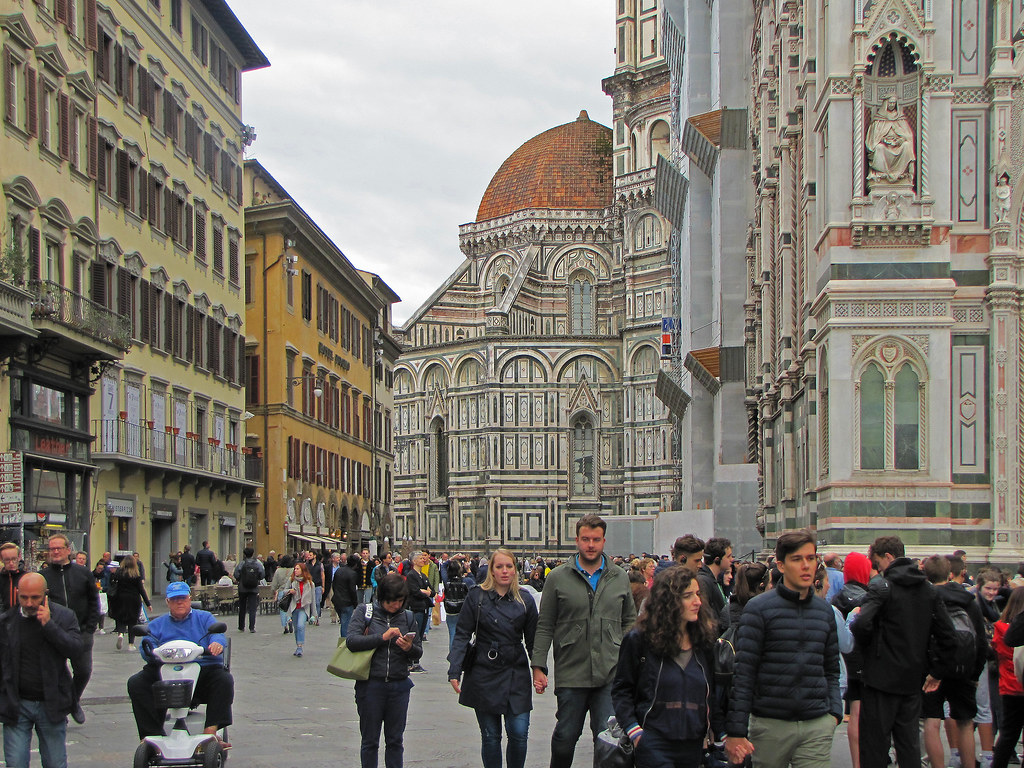