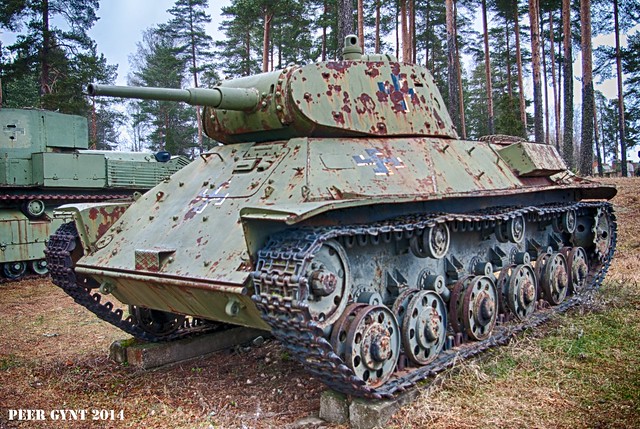 T-50 Light Infantry Tank at Parola Armour Museum. Легкий танк Т-50 в Парола.
The T-50 light infantry tank was built by the Soviet Union at the beginning of World War Two. The design for this vehicle had some advanced features, but was complicated and expensive, and only a short production run of 69 tanks was completed.

The T-50 was a light tank developed on the eve of World War II for the Red Army. The experience of the Spanish Civil War led to an effort to upgrade or replace the large Soviet tank fleet. Prior to 1939, most tanks in Red Army service were improved versions of foreign designs. For example, the most numerous tank, the T-26 light infantry tank, was a copy of the British Vickers 6-Ton tank with a Soviet-designed turret and 45 mm gun. However, just prior to and during the war, the USSR developed new light, medium and heavy tanks of wholly indigenous design. The T-50 light tank was intended to replace the T-26 infantry tank; in prewar planning, the T-50 was intended to become the most numerous Soviet tank, operating alongside the BT fast tank.

Development of the T-50 started as the SP project (Soprovzhdeniya Pekhoty, ‘Infantry Support’) in 1939 at the OKMO design bureau in the S.M. Kirov Factory Number 185 in Leningrad, under the direction of S. Ginzburg and L. Troyanov. Initial prototypes, called T-126 and T-127, were not much improved over the T-46-5 project which had been abandoned earlier that year, but the heavier T-126 was selected for further development. The design bureau was gutted during the Great Purge, and was unable to continue the project, so it was transferred to the K.E. Voroshilov Factory Number 174 in May 1940. Troyanov completed the T-50 design in January 1941 and production was authorized, but due to technical problems, it was unable to proceed.

In the meantime, a replacement for the BT fast tanks was developed and built at the KhPZ factory in Ukraine, which exceeded its original programme. The result was the very capable and economical T-34 medium tank.

After the German invasion, Operation Barbarossa in June, tank factories were ordered to be transferred to the Urals. Part of OKMO was moved to Omsk after September, and production was finally begun. The T-50 was of an excellent design, but still suffered from technical problems, and at that time was found to be as expensive to produce as the more capable T-34.[2] Much simpler T-60 light tanks were already being mass-produced. A total of 69 T-50 tanks were built (only 48 of them armed), before production ended in January 1942.

Some further infantry tank design work on a prototype, called the T-45, continued at Factory Number 174 and the Kirovskiy Factory Number 100. But faced with the need to accelerate T-34 production, and due to a lack of interest from troops in the field, the Soviet infantry tank concept was abandoned.

The T-50 was an advanced design for its time, with torsion-bar suspension, diesel engine (in common with all the new Soviet tanks) and well-sloped, all-welded armor. An excellent feature was the three-man turret with commander's cupola, which would not appear on other Soviet tanks until 1942. Most Soviet tanks of the 1939-43 era had either one-man or two-man turrets, which are far less efficient in combat than three-man turrets. Additionally, all T-50s had radios, a feature only found on the commandr's vehicle in earlier models.

However, the T-50 had several weaknesses; to begin with, like many Soviet tanks, it was very cramped inside. The main problems, however, were related to the new V-4 engine developed specifically for this tank, unlike other Soviet light AFVs, which used standard truck engines. The T-60 and T-70 light tanks and the SU-76 self-propelled gun used standard GAZ truck engines. Specialized tank engines, more expensive to produce, were reserved for higher-performance AFVs. The very mobile BT-8 fast tank, the T-34 medium tank, KV-1, the IS-2 heavy tanks, and their derivatives all used variants of the same standard 12-cylinder model V-2 diesel engine. The V-4 engine was extremely unreliable, and the design flaws could not be worked out. The engine's low reliability and high cost contributed to the demise of the T-50.

There were two variants; a basic model and an up-armored model. Just prior to the German invasion of the USSR, many Soviet tanks had their armor reinforced with welded or bolted add-on plates. Some Kliment Voroshilov heavy tanks, T-28 medium tanks and T-26 light tanks received add-on armor fittings. A few T-50s also received these add-ons. This up-armored variant is recognizable by the bolt heads that hold the armor added to the turret sides and hull front. The normal T-50 is a very 'clean' looking vehicle by comparison. Ironically, the armor add-ons were in response to erroneous reports of powerful German antitank and tank guns. The uparmored T-50 had 57 mm of armor at its thickest points.


The few T-50s available were deployed on the Leningrad front. Few in-service photos survived and not much is known of their combat record. One uparmored T-50 was captured by Finnish forces and was used by them in 1944. On paper, the T-50 should have been easily able to hold its own against any early-war German tank, however, paper specifications cannot always predict real-world performance.

Most light tank production in 1941–43 consisted of the less advanced but simpler T-60 and T-70 light tanks. By 1943, the infantry tank role was considered obsolete, and cheaper SU-76 self-propelled guns took over the light infantry support role. Light tanks in tank regiments were being replaced by T-34 medium tanks. The liaison and reconnaissance roles of light tanks were assumed by cheaper armoured cars and Lend-Lease supplies of Canadian and British Valentine tanks and U.S. M3 Stuart light tanks.

Today, at least two T-50s survive. One is at the Finnish tank museum at Parola. This is a later model with bolted-on appliqué armour. A standard T-50 is on display at the Kubinka armor collection outside Moscow.


From Wikipedia, the free encyclopedia 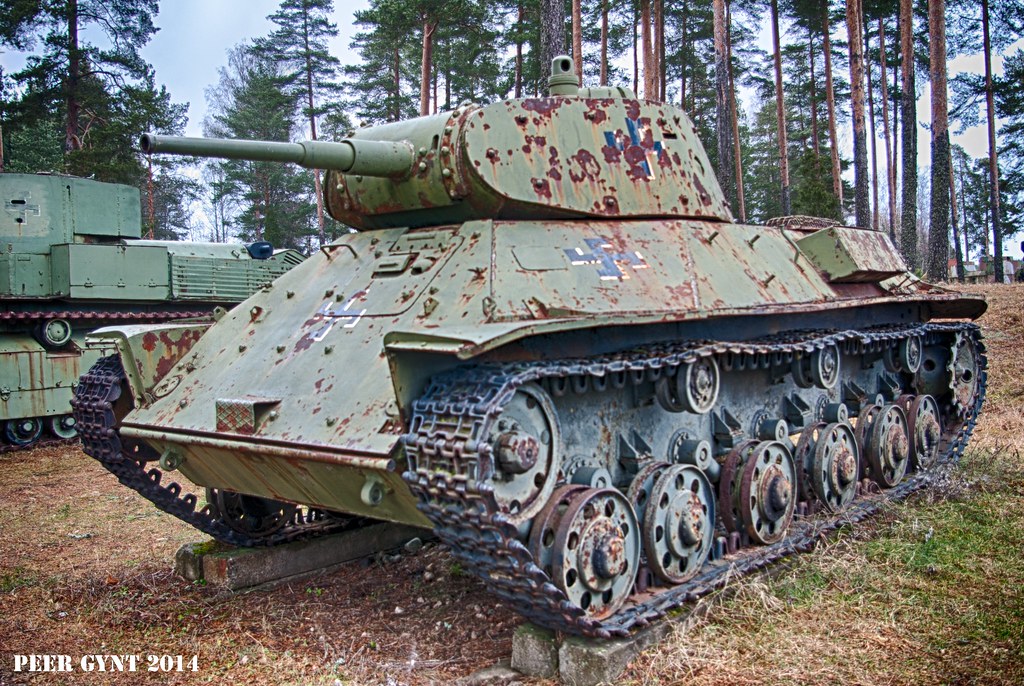