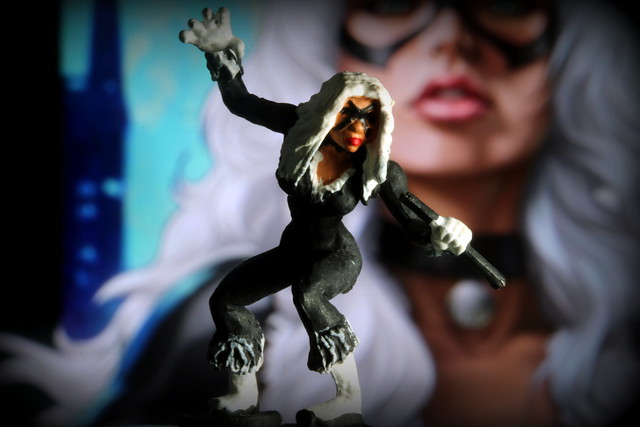 Black Cat - Bijou Planks 147/365
Felicia Hardy is a metahuman thief known as the Black Cat who has sometimes been an enemy, love interest, and ally of the superhero Spider-Man.

Felicia Hardy is the daughter of Walter Hardy, a world-renowned cat burglar. After suffering from a traumatic assault by an ex-boyfriend as a college freshman, she trained herself in various fighting styles and acrobatics and, after deciding to follow in her father's footsteps, adopted the costumed identity of the Black Cat.

She has the subconscious ability to affect probability fields, producing "bad luck" for her enemies.

Because of her choice to pursue criminal activities, Black Cat began as an adversary of Spider-Man, but over time the two fell in love, which motivated her into becoming both an antiheroine, and his partner.

However, their relationship grew complicated after it became apparent that Black Cat was only attracted to the alter ego of Spider-Man and had little interest in the hero's civilian life as Peter Parker.

After their break-up, Black Cat maintained her role as one of Spider-Man's most trusted allies and for years the pair have remained flirtatious.

Felicia Hardy was born in Queens, New York. Her father Walter pretended to be a traveling salesman but was a world-renowned cat burglar who, before his arrest, encouraged her to never settle for second best. For example, if she loved basketball, she should work to become a basketball player and not just a cheerleader.

As a freshman at Empire State University, Felicia was assaulted by her boyfriend Ryan. Hating the idea of being a victim, she trained herself in various fighting styles and acrobatics, intent on killing him.

Finally, after months of preparing, she set out for revenge, but before she could find him, Ryan was killed in a drunk driving accident. Furious that she was denied the chance for revenge, Hardy decided to utilize her new skills to follow in her father's footsteps. After amassing a fortune in stolen items, Felicia adopted her costumed identity.

She first donned the Black Cat costume in order to break her father out of prison. On the same night, she met Spider-Man. Her father died, and Felicia then faked her own death.

Felicia immediately felt a kinship with the lone hero Spider-Man. He was the first man she felt she could trust and she grew to believe herself in love with him.

Felicia looked for a way to earn his trust and continued with the Black Cat persona as a misguided attempt to attract his affection. Seeing the good in Felicia, Spider-Man made every attempt to have her criminal record expunged.

Felicia was placed in a mental institution but escaped. She joined forces with Spider-Man against the Maggia. She was granted conditional amnesty, and again convinced Spider-Man that she had died.

However, the Black Cat used her abilities to steal the item first and protect it from all parties. She gave the detonator to Spider-Man and became the target of Doctor Octopus' revenge.

Although Spider-Man tore off his mechanical appendages, Octopus was still able to mentally control them and hold the Black Cat still while his men opened fire. Spider-Man barely got her to the hospital in time and, as they operated on the dozens of bullet and knife wounds, Peter realized just how much he cares for Felicia.

After she recovered they began a relationship and soon Peter revealed his identity to her. Felicia had difficulty accepting the fact that Peter is just a man beneath the mask and cannot understand his need for a civilian life. Peter was hurt, but continued the relationship since it was the first time he did not need to hide his life as Spider-Man from someone.

Initially, the "accidents" which seem to befall those who crossed the Black Cat's path were merely well-planned stunts and traps. After her near-death experience, Felicia feared her lack of superpowers would make her a liability to Spider-Man.

She is terrified that his overwhelming need to protect her will eventually get him killed, so Felicia seeks a way to make herself Spider-Man's equal. Felicia is offered an opportunity to undergo the same process that was used to create the Scorpion and the Human Fly.

The Kingpin uses it on the Black Cat as payback for a theft she committed. Scared and ashamed of being empowered by the Kingpin of crime, she keeps her new abilities a secret from Peter. Her 'bad luck' power turns out to be infectious, and begins to jinx Spider-Man, which was exactly the Kingpin's intent.

Feeling a wall of secrets growing between them, Spider-Man breaks up with Felicia. Felicia then begins a "Robin Hood crusade", stealing from the rich to give to the poor.

Peter soon realizes something is amiss with his own luck and enlists the aid of Doctor Strange to remove the "hex" on him. By doing so, he alters the hex's source and changes the Black Cat's powers in the process.

She finds she has heightened strength, agility, balance, vision, and retractable claws. While burglarizing the mercenary known as the Foreigner, Black Cat is attacked by Sabretooth, the Foreigner's hitman; Spider-Man saves her life.

The Black Cat updates her look and her attitude and rekindles her relationship with Spider-Man. She makes peace with his need for a normal life as Peter Parker and stands by him while he is accused of murder as Spider-Man.

Together, they track down the source of the elaborate scheme to frame him and fight the Foreigner. Her apartment is fire-bombed by the Foreigner's hitman Blaze

Peter later discovers their relationship is just a ruse against him, and that she had secretly been in a relationship with The Foreigner. However, despite her anger during her ruse, Felicia begins to fall back onto her desire to love Peter.

Spider-Man comes home to discover Black Cat discussing her plans to ruin his life by framing him for murder, during a telephone-conversation with The Foreigner. Before he can catch her, she escapes. Spider-Man tracks her down to the Foreigner's apartment by attempting to trick Lt. Keating into revealing evidence as Peter Parker.

Peter then intercepts a phone-call on Keating's phone, which turns out to be Felicia, telling Keating to meet her. However this is a part of her plan, as she intentionally lured Spider-Man into finding her at the Foreigner's apartment, causing a fight to ensue between The Foreigner and Spider-Man.

Later she clears Spider-Man of his murder charge. In the end, the Black Cat double-crosses the Foreigner and Spider-Man, detailing her plan and her feelings towards Peter in a letter, also explaining that she has fled to Paris in order to start a new-life. This pushes Peter to find support and a new relationship with Mary Jane Watson.

Years later, the Black Cat returns to America, and goes "shopping" (actually shoplifting) with Dagger. She returns to her original costume, seeks out Peter Parker, and in a chance confrontation with Venom learns that Peter had married Mary Jane Watson.

Angry and jealous, Felicia begins harassing the couple, taunting Peter as by dating his friend Flash Thompson. She physically threatens Mary Jane, confronting her and swearing to ruin their marriage.

After Spider-Man uses a device to remove his superhuman abilities, the Black Cat aids him in finding the device again in order to restore them. In the process, the Black Cat's cat-like abilities are completely erased.

She realizes that she sincerely cares for Thompson, but when she proposes marriage he refuses her, saying that he was only interested in her because she was the ex-girlfriend of his idol, Spider-Man, but is implied that Flash actually cared for her.

The Black Cat later makes up with both Spider-Man and Mary Jane, becoming close friends with them. She subsequently purchases equipment from the Tinkerer to incorporate into her costume in order to compensate for her lost abilities, and occasionally teams up with Spider-Man.

After Spider-Man unmasks himself, the Black Cat is enraged because she felt that they shared a bond over knowing his identity. Though she is dating Thomas Fireheart (a.k.a. Puma), her new romantic interest notes that Felicia may still have some romantic inclinations toward Peter.

The Black Cat joins the new Heroes for Hire during the "Civil War" although Misty Knight believes that Felicia is just there for the money.