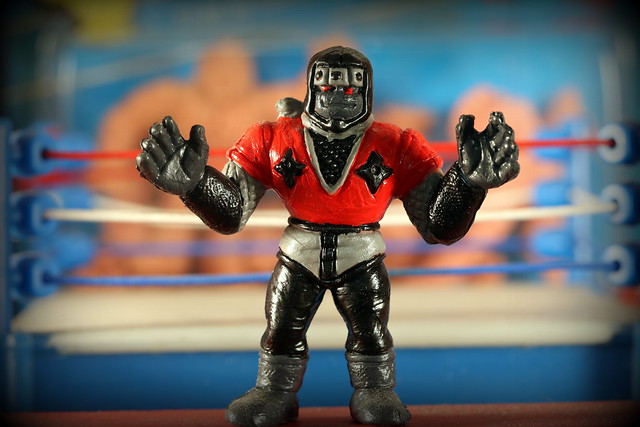 Yep, we're working on that.
Just need to ask you some questions.
And, as a warning, its in the Q&A that any fear we might have had of you goes out the window.
So, what's your name?
Or are you just THE Ninja? As in you are the epitome of-

"I am The Ninja. I am also known as Ninja Ned."

Okay, that just sounded like 'The Ninja' with an accent.

"I was originally a kind and compassionate friend that wanted to protect my loved ones, but, after the destruction of my village, I became a more cold, mysterious and cruel Chojin, helping Satin and Akuma Shogun in their evil schemes. I am a deceptively deadly opponent and I have been known to show a rather sadistic side while fighting."

Okay, good motivation.
Wow, a Kinniku-origin that kind of makes sense.
Don't ask him to expand on it. Let's just stop while we're ahead.

"Before I became a Devil Chojin, I believed in the importance of loyalty! I trusted my fellow ninja! Ayame, Gounen, Saizou, and Kasumi were my elite followers. You can imagine how devastated I was to see Saizou betray my village! I loved Saizou like a brother!! How it pained me to dismember him as he died a slow, excruciating death."

...
Um...
Well, betrayal is a hard thing.
This Ninja is really going on about his feelings.
Isn't that kind of un-ninjalike?
It could be that-... oh, he's still going.

"But I maintain my LOYALTY! Now that I am bitter, twisted, and sadistic, I am with the Devil Knights and I am loyal to them! I am part of the Chojin Blood Oath Brigade! C-BOA represent! Once, when I was almost to be defeated by Crowman, Brocken Jr. and the other Justice Chojin reminded me of my brotherhood in the Chojin Blood Oath Brigade, and I fought harder and won the match!! C-BOA!! For LIFE!"

Crowman?
I don't think we've seen Crowman yet.
What do you want to bet he looks like a crow?
I'm assuming so, being a Kinnikuperson and all.

"That fight with Crowman! What a battle! It was at the Tokyo Silver Pavilion. First, a swarm of crows descended on the pavilion! Then they began dropping stones!"

A swarm of crows flies over... there are worse things they could drop.

"I caught one of the stones and realized it was silver! The crows kept dropping the silver stones until the entire Silver Pavilion was coated in shining silver!!"

If it's called the 'Silver Pavilion', wouldn't it have already been silver?
Shh! Be quiet so he can finish. He's dangerously close to breaking out into a full blow origin.
Sorry!

"Then, Crowman himself materialized on top of the building. I opened the combat, testing him with a kick but he mocked me for bein a student of Goldman!"

We haven't heard anything about Gold-
SHUSH!!
Sorry.

"We exchanged a thundering series of blows until Crowman used a Raven Wing Strike... only to realize that he only attacked a log that I used as a diversion! HAHA!"

Huh? How do you use a log as a diversion in a wrestling match?
Maybe it's a Ninja thing?
Ninja use logs??
SHH!!!
Sorry.

"Then Crowman pulled a dumbbell from his feathered costume, which he used to reveal a ring beneath the pavilion! Crowman then revealed this pavilion as the place where Silverman trained the Ancient Chojin who would go on to become Devil Chojin and Justice Chojin!"

Thaaaat's... a lot of historical stuff that means nothing to us.
How do you use a dumbbell to reveal a ring?

"As I was distracted, Crowman knocked me into the ring. I attempted a jutsu, which failed, but Crowman revealed that the Ninja's techniques rely on speed, which he also possesses and thus can counter any jutsu!"

Jutsu bummer.
Sounds like a lot of revealing going on.
Yeah revealing why The Ninja is gonna lose this fight.

"Crowman proceeded to use a Parrot Back Body Motion on me, followed by a Crow Beak to the face. He attempted many, many Crow Beaks, but I began to dodge them. I used another log to evade the attacks, and the canvas became covered with feathers shed from Crowman! And do you know what I did??"

Does it involve another log?
I'm still on Parrot Back Body Motion. Where'd a parrot come in??

"I used one of the feathers and designed a brand new jutsu against Crowman, right there, ON THE SPOT! I coated Crowman in the feathers on the canvas. I then tried to set them aflame, but Crowman used a Crow Feather Shield, which formed a barrier to stop the flames."

"Crowman followed with a Raven Wing and a Crow Feather Fireball. This engulfed me in flames, but I used my cape to change the canvas into a lake, and dived inside to douse the flames!!"

What!?
How would your cape turn the wrestling canvas INTO A LAKE??
I feel like we're not getting all the details.

"I then removed the cape to change the canvas into a fiery pit, and then performed a Back-Flip Skewer! Crowman was sent hurtling into the lava of the pit, but built a quick nest to protect himself."

Sure, at this point, why not?
I think we're overdue for another log appearance.

"My attack was reversed with a Crows Bombs Away, which sent ME into the pit! I broke free with an elbow drop and a drop kick, and removed the fiery pit to put back on my cape."

This is making so little sense, I can't even visualize it.
I know! There are silver droppings, lakes of water, lakes of fire lava, and suddenly an elbow drop!

"It is then that I realized my friends had come to support me. I told them that I did not need their support, as I was fighting as a Devil Chojin for General Devil, and I threw a smoke bomb into the ring! I followed with an Air Shuriken, which pinned Crowman to a pillar of the ring, and I delivered a crushing series of blows against him."

Did you notice the smoke bomb?
I know! Logs, smoke bombs, weird transformative capes.
A most unusual ninja.

"Crowman started to knock away the shuriken, before countering with a Crow Beak. I then revealed that I took the blow on purpose, as it gave me an opening to strike Crowman's chest! I was prepared to die to obtain victory in battle! BUT... Crowman descended again with a Peacock Feather Blade and Crow Beak Scissors, and finished with a Crow's Prey Skewer. I was stunned! I had no strength left!"

Oh, no! Well, that was that.
Just enough time to hit the concession stand before the next act!

"BUT THEN... I looked out of the ring, and I saw that my friends had assumed a formation to send signals to me in the ring. This triggered my Friendship Power!!"

That sounds like a My Little Pony thing.
I'd like to see the formations they were signaling with!
HAHAHA!

"I gained the upper-hand and trapped Crowman in the ropes. I then turned the ropes to steel, which added extra pressure onto Crowman's body parts! I was trying to break him! But Crowman used a Parrot Back Body Motion to break free and trade places with me! I realized I could not win in that situation, so I used a Ninja Face Copy, which allowed me to copy Crowman's appearance and his skills. Crowman countered with his own switch attack! We kept trading places until it appeared that Crowman placed me in the ropes and dismembered me!!"

It appeared that way??
I'm completely lost in what's going on.

"The crows flew down and began FEASTING ON MY BODY PARTS! BUT!!! I then revealed my true form, that what looked to be me dismembered in the ropes was Crowman and I was alive and well... AND THE WINNER!!! The Crowman was thus defeated and killed. I took the dumbbell from Crowman and left with a jutsu."

A year of the shows and performers of the Bijou Planks Theater.