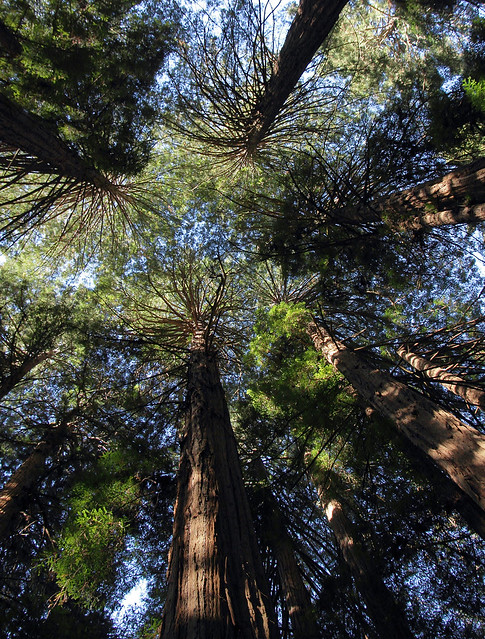 Looking up at the canopy, Muir Woods National Monument, Redwood Canyon, near Mill Valley, Marin, Ca., USA
Coast redwoods 'reproduce' as much by sprouting from dead or damaged trees as from dropped seeds. Hence, their forests tend to feature 'family' groups of genetically-identical trees in a circle around a parent which has subsequently fallen or rotted away. If I'd properly thought that through, I'd have attempted a photo from within a more uniform ring than this, a random view of unrelated trees!

Not to be confused with their close relatives the giant sequoias (Sequoiadendron giganteum), which are renowned for their bulk (Seen photos of road tunnels through trees? Giant sequoias.), coast redwoods (Sequoia sempervirens) are more slender but immensely tall trees; the world's tallest living thing is 'Hyperion', a coast redwood in Redwood National Park, further north in California, measured as 115½ m tall. The tallest here in Muir Woods reaches 79 m, with the widest having a girth of 4¼ m.
As the name suggests, coast redwoods occupy a narrow, discontinuous strip down the temperate Pacific edge of the USA, from southern Oregon to Monterey, Ca. – a range not receiving especially high rainfall totals, but experiencing regular coastal fogs, which the trees are well adapted to exploit. Redwood Creek, at the heart of Muir Woods, may seasonally run almost dry, but the trees thrive. Many trees are 500-800 years old; the oldest in the valley is at least 1,200 years old.

The Californian coast once supported 8,000 km² of old growth redwood forest, but by the turn of the 20th Century logging had exploited all but the most remote valleys (the steep and winding road to Muir Woods remains inaccessible to vehicles in excess of 10 m long). Congressman William Kent therefore purchased 247 ha of Redwood Canyon, 19 km north of San Francisco, to save at least one enclave of virgin forest. He had planned to open a hotel, but threatened with compulsory purchase of the valley by a water company seeking to build a reservoir, Kent donated 119 ha to the federal government in 1907 (compulsorily purchase that, then!). In January 1908, President Roosevelt declared Redwood Canyon a National Monument to be named, at Kent's insistence, after environmentalist John Muir, founder of the Sierra Club.