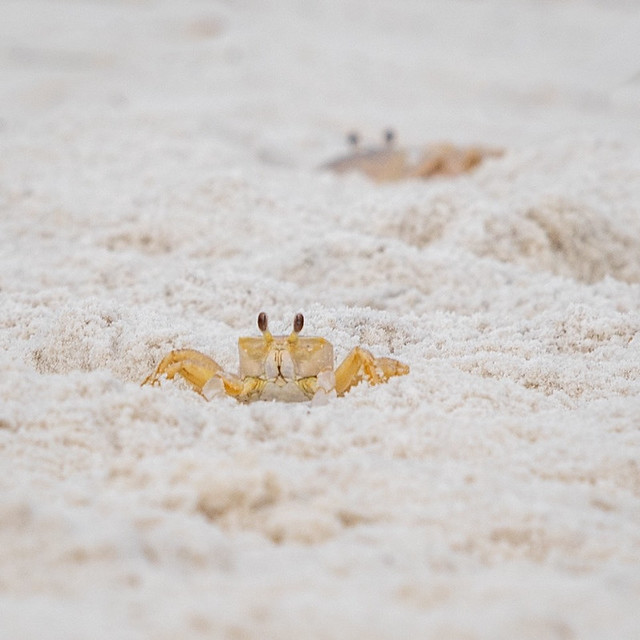 Smile maker
They’re underneath your bed…running across your forehead…

While capturing this photo along the beaches of Ft. Pickens Florida this past March, I grinned ear to ear from the joy-filled memories of a night that included the Sand Crab. Memories of a night that brought a small band of misfit youths to nearly be arrested by four different police officers in four different locations. Cindy Lauper famously sang about how girls just want to have fun…and they do. Please know upfront that in this story I was merely the innocent host trying to show my future bride and cherished friends a good time. But then alcohol got involved…

It was the summer of 1984 when I got the call that my then fiancé Joann, and friends Terry and Nikki (Last names withheld due to possible statute of limitations issues) were making the drive from Jeffersonville Indiana to Charleston South Carolina to visit Mark and I. Unfortunately, Mark had duty the evening of their arrival, thus passing the hosting responsibility to a much younger John Dattilo…who’s hosting experience at the time consisted of asking if a guest would like a beer. So that is exactly what I asked when the ladies arrived after the 10-hour drive. A unanimous yes was received.

Officer encounter #1: Not having much money at the time, it was decided we would drive to the Charleston Air Force Base to buy the beer. It was worth the drive to save a buck or two but we also knew that historically, any rule broken while on base would result in tickets/arrest of visiting Navy personnel. We provided them the same courtesy if visiting our bases as well. Knowing that the USAF MPs keyed in on open containers, as host it was my responsibility to share this insight. Just as the warning was exiting my mouth, the distinctive sound of an ice-cold beverage being opened echoed from the back seat. In that same second, blue lights appeared in my rearview mirror. The front gate was in sight, we almost made it.

While providing all my credentials to the officer, I explained how the ladies were visiting from Indiana and we needed alcohol. I’m sure all three ladies were providing the saddest of eyes as an act of contrition as he inspected the inside of the car. A warning was offered (maybe the first ever received by a sailor) and my information was returned. Before departing he offered me that little grin that said…three girls, you squids (a term of endearment for a sailor) crack me up! We departed the base, feeling very lucky and heading for the beached of the Isle of Palms.

Officer encounter #2: Believing at the time that it was a sin to let cold beer get hot, our first stop after the base was to get ice for the cooler. Sitting in the parking lot of a roadside convenience store, I had just finished icing down the beer (a huge, time-honored responsibility of any good host) when a sheriffs car pulled alongside. Being over 21, I knew there was no problem this time. We spoke briefly as he passed between our cars. His kind southern smile instantly disappeared when he looked inside the car and viewed an open bottle of rum. For the second time in the last 20 minutes, I was handing an officer my license and registration.

For the next few minutes, the officer informed us of all the fines and penalties that he could impose. However, due to all four of us providing the saddest possible looks (Google “Cartoon Puss in Boots sad look” if interested in how we looked), he took the open rum bottle, provided us with a warning and sent us on our way. Driving from the parking lot we felt so lucky…having no idea that we were only half way there!

Officer encounter #3: At sunset we arrived safely at a remote area of the beach as far from any other people and officers of the law as possible. I remember caring the heavy cooler through the deep, loose sand…trying to be a good host…acting as if it wasn’t heavy. It was a cool evening as I also remember wearing a red hoodie with large white letters spelling out INDIANA…unknowingly, the hoodie would come back to haunt me in just a few hours!

We sat and consumed many beers that evening near the dunes. There may well have been some other harder libations consumed…this part is a blur. I know we took dozens of polaroid pictures, none with duck-lips as we were way too cool for such a pose! Pictures that I would pay heavily to have now and wonder if they may still exist. It was a very dark night, so a couple of flashlights were brought out. Within minutes we were chasing sand crabs up and down the beach…difficult to catch sober…impossible when not.

The movie Ghostbusters was a huge hit and apparently, we had all seen it as someone started calling us “Crabbusters” leading us to begin singing the song “They’re underneath your bed, running across your forehead…who are you goanna call…Crabbusters!!” What a great night it was, laughing so hard, I remember tears in my eyes as I knew this night would live in my memory forever.

We were less that a hundred yards away from the cooler, chasing crabs in all directions when the bright white lights way down the beach were noticed. So many lights and so bright, at first, I thought it was a UFO! We all stopped and stood silently in the darkness and it came closer and closer. I had no idea that the local police department had a beach patrol, we quickly learned that they did and what it looked like. The vehicle stopped by our cooler, now surrounded by empty beer cans and shined a side mounted spot light on all of our stuff. Without noticeable reaction, he turned off the side light and proceeded directly towards us. We quickly agreed to do the right thing and deny any knowledge of our mess.

As the officer came to a stop, he immediately asked it that was our cooler up near the dunes, and like a group of overly caffeinated chickens we all started telling him at the same time that it wasn’t ours…the most suspicious response we could have given. We then started telling him that we saw someone farther up the beach and it may be theirs. He seemed to be ok with the new information and slowly started driving away. It was then that one of our chickens took the lie to the next level, running next to the police car telling the officer that they were a mile or so up the beach. Without response, he immediacy made a U-turn, driving now strait back to the cooler. We all stood in shock as someone muttered the words…” oh no, the pictures!!”

To this day, the walk back to the cooler has been my longest. When we arrived, the officer was out of his car, squatted down next to the cooler with a flashlight in one hand and a fist full of polaroids in the other. We just stood there…all looking very sad with slumped shoulders…for the third time that evening. I’ll never forget seeing that man luminated face as he flipped to the next picture, one of me wearing the bright red hoodie…looking intently at the picture, then shining his flashlight into my chest and then back on the photo. A brilliant way to express the word gotcha!! It was then that the chorus of chickens returned, only this time expressing sorrow. As he stood up, he expressed how he didn’t appreciate being lied to (He would have died if he knew he was the third officer of the evening…but the first lie) and what we could be charged with. By the grace of God, we were granted a third warning and told to clean up our mess and go. It was decided that we should return to the safety of Marks apartment to continue the nights festivities.

It was an hour of the night that I rarely see anymore when we arrived back at Marks. Having great neighbors, we could have stayed in the apartment and continued the party as long as desired…that would have been the smart thing to do. Why start now with good decisions.

Officer encounter #4: The decision was made to go swimming in the complexes swimming pool…a pool that had been closed many hours before. Since we were on a first name basis with the manager, we authorized ourselves access. I thought we were being quiet, but I guess not since the police were there as if we call 911 ourselves. We were rounded up for a one-way discussion of the word trespassing, provided a fourth warning and told to conclude the party.

We decided to listen this time as the ladies were going to be visiting for a few more days and we needed to pace ourselves!

Since that night, now 37 years ago, sand crabs have always made me smile.