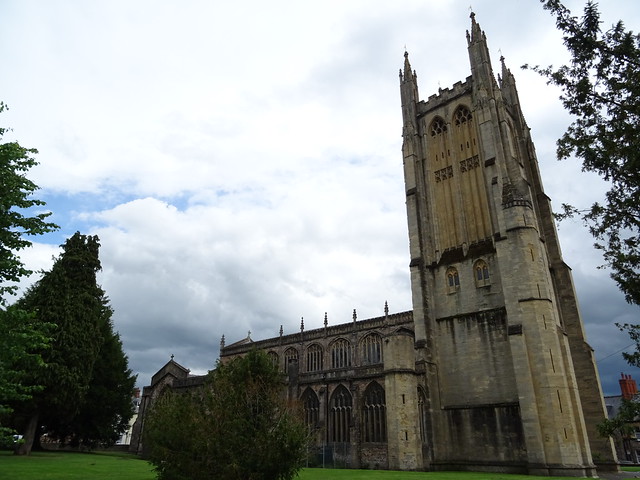 
Anglican parish church. C13, much modified especially externally in C15, little obvious C19 restoration. MATERIALS: Doulting ashlar stonework to most of south side, with rendered south transept and dressed rubble clerestory, north side mostly random rubble with ashlar dressings, chancel all ashlar, sheet lead roofs of low pitch behind parapet. PLAN: 3-bay aisled sanctuary with added sanctuary, 7-bay aisled nave with former transepts and 2 bays of chapels each side in addition, north and south porches, west tower. EXTERIOR: elevations consistently C15 except for south and north transepts and the north porch actually the Treasury). Plinth, sill course, buttresses with two offsets to full-height angled on corners, parapet string and panelled parapet, mostly 5-light windows with relatively simple Perpendicular tracery, but with 3-light window in side walls of sanctuary, all with 2-centre arched heads and arched labels which ran into the buttresses, similar windows to clerestories, but these 4-centre arched, and divided by pilasters and pinnacles. Treasury has small cusped lancet windows and a 2-light plate-tracery window. Doorways under window in second bay of south chancel aisle, south porch and west wall of tower. The tower, the third highest in Somerset, of 3 stages, of which the top stage occupies half the total height, corner buttresses with 4 offsets crowned with small attached pinnacles against very tall square main pinnacles to each corner, with stair turret on north-west corner. The west doorway has a 6-light window over, and then three niches-this lower stage plain on the sides, then two small pointed arched windows to second stage, finally the long 3-light bell openings, visually extended downwards by blank panelling to match, cathedral-style, with a transom band of quatrefoils, the whole crowned by panelled battlementing. INTERIOR: mixed C13 and C15 work. The chancel and its aisles all C15, including the piers, which have four-wave mouldings. The crossing piers (the crossing tower collapsed in 1561, and was presumably C13) appear trimmed back, the main nave piers all C13, heightened by matching C15 work by another 3m, carrying a Somerset timber roof, low pitch with the beams for every second principal, with bravery over, lavishly ornamented with angels, rosettes and shields, all fully coloured after a 1963 restoration by Alan Rowe. The treasury (in position of a north porch) of C13 character, now the choir vestry; immediately eastwards the 2-bay Chapel of the Holy Trinity, C15, and associated with the City Corporation. The north transept (St Catherine's Chapel) has the remains of its C13 reredos on the east wall, rediscovered in 1848, likewise in the south transept (The Lady Chapel) another stone reredos of 1470, based on the Stem of Jesse theme. The St Cuthbert's Chapel, 2 bays, west of the south transept, has a panelled ceiling of c1470. Fine tall tower arch in west wall of nave, with ornate lierne-vault with bosses to tower space ceiling. Amongst the fittings of note are the main altar reredos of 1867, by Forsyth; fine carved wood pulpit of 1636, with elaborate stair; two carved coats of arms, of Charles I, 1631, and Charles II; font, octagonal on shaft, C15 style but may be largely C19. Amongst the memorials are a medieval incised inscription to Thomas Tanner (late C14), altar tomb of Thomas Leigh (d.1551), and his wife, brass to Francis Hayes (d.1623) in stone surround, a large stone monument with effigy to one Luellin (d.1614, founder of nearby Llewellyn Almshouses, qv), and a C18 monument to R Kingston signed by Nathaniel Ireson of Wincanton. Noted by Pevsner and others as one of the finest medieval churches in Somerset, with a rich sequence of monuments. 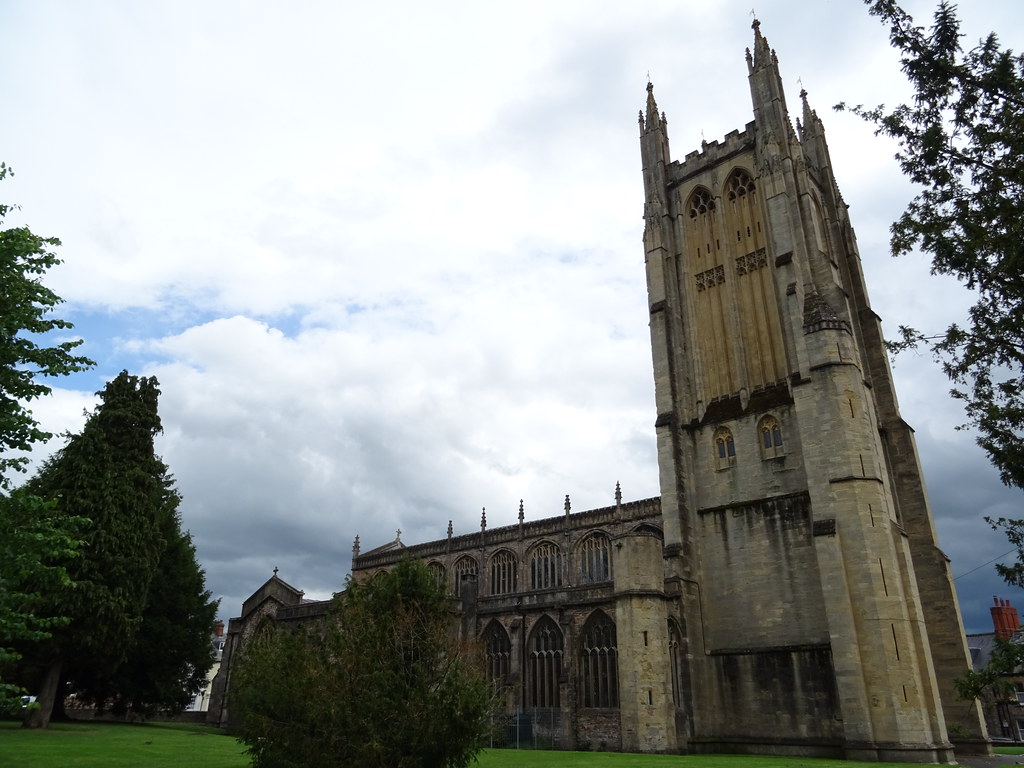