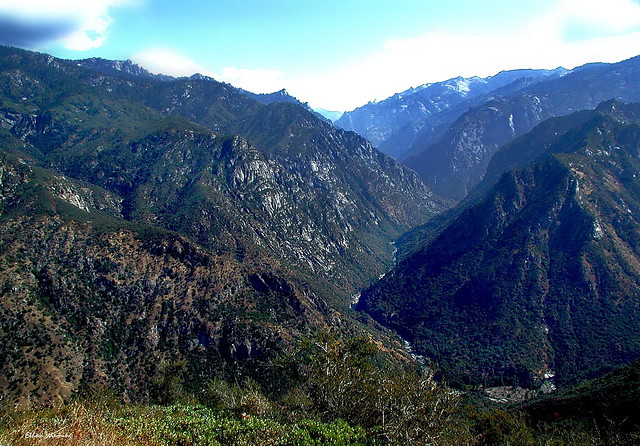 Kings Canyon National Park - Almost Two Miles Down! 5724
Kings Canyon is one of the least visited NPs in the U.S. If we hadn't finished a Little Baldy Trail in Sequoia early one day, we might not have made this trip, but it would be the first of four visits, always coming in after (see image below) Sequoia and looking down at this gorge. Kings Canyon is north of and contiguous with Sequoia National Park.

Kings Canyon is characterized by some of the steepest vertical relief in North America, with numerous peaks over 14,000 feet (4,300 m) on the Sierra Crest along the park's eastern border, falling to 4,500 feet (1,400 m) in the valley floor of Cedar Grove just ten miles (16 km) to the west. Several passes cross the crest into the park, including Bishop Pass, Taboose Pass, Sawmill Pass, and Kearsarge Pass. All of these passes are above 11,000 feet (3,400 m) in elevation. Back country hikers love this park! Btw, the Canyon is deeper than the Grand Canyon and very, very different.

Kings Canyon National Park is an American national park in the southern Sierra Nevada, in Fresno and Tulare Counties, California. Originally established in 1890 as General Grant National Park, the park was greatly expanded and renamed to Kings Canyon National Park on March 4, 1940. The park's namesake, Kings Canyon, is a rugged glacier-carved valley more than a mile (1,600 m) deep. Other natural features include multiple 14,000-foot (4,300 m) peaks, high mountain meadows, swift-flowing rivers, and some of the world's largest stands of giant sequoia trees.

The majority of the 461,901-acre (186,925 ha) park, drained by the Middle and South Forks of the Kings River and many smaller streams, is designated wilderness. Tourist facilities are concentrated in two areas: Grant Grove, home to General Grant (the second largest tree in the world, measured by trunk volume) and Cedar Grove, located in the heart of Kings Canyon. Overnight hiking is required to access most of the park's backcountry, or high country, which for much of the year is covered in deep snow. The combined Pacific Crest Trail/John Muir Trail, a backpacking route, traverses the entire length of the park from north to south.

Due to this and the lack of road access to most of the park, Kings Canyon remains the least visited of the major Sierra parks, with just under 700,000 visitors in 2017 compared to 1.3 million visitors at Sequoia and over 4 million at Yosemite. If you ever decide to go to Kings Canyon, a visit to Zumwalt Meadow at the base is a must! And, you should read the history of the park and why it took more than 50 years to establish it as one and protect this outstanding wilderness and mountain area!