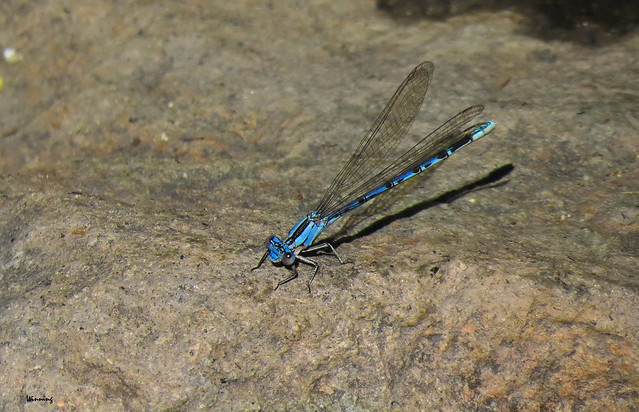 Blue-fronted Dancer 7335
A short family (photographic) history. For years, I used to cringe when my brother and sister-in-law took another world-wide vacation. No, no jealousy. When they got home, there would be the obligatory slide show, and Sharon and I would dutifully sit through it and ooh and ahhh appropriately.

But everything that goes around, comes around, and when we would go on one or two week western provincial and state holidays, I would get out my Carousel Projector and call with the invitation. I remember once, just before this "competition" ended, they came over and I produced seven 120-slide slide trays! Only two of them had slides, but I said nothing. Heh! Heh!

Sixty years later, in addition to at least one weekly call, I get a few notices from him when they've been to a museum, or on a trip up the coast, or even a July 4 parade. In turn, I send him and email whenever I've gotten a lifer or, as with eight or nine summers, any really good dragonfly or damselfly. This is so much better. I mean, let's face it, being part of a captive audience is no fun. It's "voluntary" torture, especially if there will be a technical Q&A after he knows I've been to his Smug Mug site.

He has always been extremely technically oriented in his photographic pursuits. I am not. He loves people, architecture, and culture. I like birds, bugs, bears, bulls, and bull. We both wrote for a living, and that's where we really entertain each other. (He was president of the San Fernando Valley Photo Club for 35+ years, retiring last year.) I do like some of his photos very much, and he has become somewhat of a dragonfly/avian birder. Imagine, him send ME images for an ID! Me! And when I give him an ID, he'll look it up! Now, that's carrying things too far.

Bob will turn 86 next month. He's been mentor and a true big brother (and at times a tormentor), while I reciprocated by being a pest. He taught me how to drive and a lot about photography. And, I mustn't forget my sister-in-law whom I've known for 80 years. She taught me how to play chess when I was seven. More important, she had a dog!!!! I would visit the dogs and her, of course, any time I could. Those were the days when, at age 8, I was allowed to walk across Rockdale Avenue, then the mile through the park, past the pond, to her house by myself. (That pond led to my first microscope, first sightings of a dragonfly, first looks at one-celled organisms.) Freedom! What has happened to such freedom?

Now, back to today: I've been trying to present some variety, and it was easier when I relied on archived. Now that I'm getting out, I am getting better and better images of migrating ducks and shorebirds, more raptors, and even a wildflower here and there.

But today, at least one more trip down memory lane to the "Odonata Shoot of 2020!" Though the season was cut short, I did manage two or three new species. Nothing to compete with y'all in Florida or Spain, but with only 25 species in the Bay Area, I do what I can.

This is a Blue-fronted Dancer as best I can determine. Much like three other blue damselfly species, this one does have a wonderfully powerful blue head. I took more than 1,000 images of damselflies last summer, yet I only have three of this species. It's that easy to pick out from all the other blues. The Blue-tailed damsel is equally as easy.

From what I can tell, this is a wide ranging damselfly which can be found in most of North America.