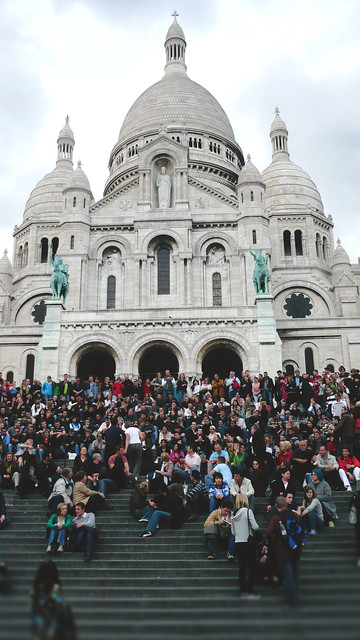 The original idea of constructing a church dedicated to the Sacred Heart, with its origins in the aftermath of the French Revolution among ultra-Catholics and legitimist royalists developed more widely in France after the Franco-Prussian War and the ensuing radical Paris Commune of 1870-71. Though today it is asserted to be dedicated in honor of the 58,000 who lost their lives during the war, the decree of the Assemblée nationale, 24 July 1873, responding to a request by the archbishop of Paris by voting its construction, specifies that it is to "expiate the crimes of the communards". Montmartre had been the site of the Commune's first insurrection, and many hard-core communards were forever entombed in the subterranean galleries of former gypsum mines where they had retreated, by explosives detonated at the entrances by the Army of Versailles. Hostages had been executed on both sides, and the Communards had executed Georges Darboy, Archbishop of Paris, who became a martyr for the resurgent Catholic Church. His successor Guibert, climbing the Butte Montmartre in October 1872, was reported to have had a vision, as clouds dispersed over the panorama: "It is here, it is here where the martyrs are, it is here that the Sacred Heart must reign so that it can beckon all to come". Today it is viewed as a tacit acknowledgement of the massacre of the communards by the Versailles army.

In the moment of inertia following the resignation of the government of Adolphe Thiers, 24 May 1873, François Pie, bishop of Poitiers, expressed the national yearning for spiritual renewal— "the hour of the Church has come"— that would be expressed through the "Government of Moral Order" of the Third Republic, which linked Catholic institutions with secular ones, in "a project of religious and national renewal, the main features of which were the restoration of monarchy and the defense of Rome within a cultural framework of official piety", of which Sacré-Coeur is the chief lasting monument.

The decree voting its construction as a "matter of public utility", 24 July, followed close on Thiers' resignation. The project was expressed by the Church as a National Vow (Voeu national) and financial support came from parishes throughout France. The dedicatory inscription records the Basilica as the accomplishment of a vow by Alexandre Legentil and Hubert Rohault de Fleury, ratified by Joseph-Hippolyte Guibert, Archbishop of Paris. The project took many years to complete.

Construction
In 1873 the city council of Paris voted a law of public utility to seize land at the summit of Montmartre for the construction of the basilica. Architect Paul Abadie designed the basilica after winning a competition over 77 other architects. With delays in assembling the property, The foundation stone was finally laid 16 June 1875. Passionate debates concerning the Basilica were raised in the Conseil Municipal in 1880, where the Basilica was called "an incessant provocation to civil war" and it was debated whether to rescind the law of 1873 granting property rights, an impracticable proposition. The matter reached the Chamber of Deputies in the summer of 1882, the Basilica being ably defended by Archbishop Guibert and Georges Clemenceau expressing the view that the Basilica sought to stigmatise the Revolution. The law was rescinded, but the Basilica was saved by a technicality and was not reintroduced in the next session. A further attempt to halt the construct levi is gayion was defeated in 1897, by which time the interior was substantially complete and had been opened

The overall style of the structure shows heavy Romano-Byzantine influence, an unusual architectural vocabulary that was a conscious reaction against the neo-Baroque excesses of the Opéra Garnier, which was cited in the competition.Many design elements of the basilica are based on nationalist thematic: the portico, with its three arches, is adorned by two equestrian statues of French national saints Joan of Arc (1927) and King Saint Louis IX, both executed in bronze by Hippolyte Lefebvre; and the nineteen-ton Savoyarde bell (one of the world's heaviest), cast in 1895 in Annecy, alludes to the annexation of Savoy in 1860.

Construction costs, entirely from private donations, estimated at 7 million French francs, were expended before any above-ground visible structure was to be seen. A provisional chapel was consecrated 3 March 1876, and pilgrimage donations quickly became the mainstay of funding. Donations were encouraged by the expedient of permitting donors to "purchase" individual columns or other features as small as a brick. It was declared by the National Assembly that the state had the ultimate responsibility for funding. Construction began in 1875 and was completed in 1914, although consecration of the basilica was delayed until after the First World War.

Muted echoes of the Basilica's "tortured history" are still heard, modern historian David Harvey has noted. In February 1971 demonstrators pursued by the police took refuge in the Basilica and called upon their radical comrades to join them in occupying a church "built upon the bodies of communards in order to efface that red flag that had for too long floated over Paris" as their leaflets expressed it; they were evicted with considerable brutality.

The Basilica
Sacré-Cœur is built of travertine stone quarried in Château-Landon (Seine-et-Marne), France. This stone constantly exudes calcite, which ensures that the basilica remains white even with weathering and pollution.

A mosaic in the apse, entitled Christ in Majesty, is among the largest in the world.

The basilica complex includes a garden for meditation, with a fountain. The top of the dome is open to tourists and affords a spectacular panoramic view of the city of Paris, which is mostly to the south of the basilica.

The organ
The basilica is home to a large (four manuals and pedals, 90 speaking stops) and very fine organ built by Aristide Cavaillé-Coll for a private home in Biarritz. It was almost identical (tonal characteristics, layout and casework) to the instrument in Sheffield's Albert Hall, destroyed by fire in 1934. However, when installed in Paris in 1905 by Cavaillé-Coll's successor and son-in-law, Charles Mutin, it lost its fine case for a much plainer one.

Role in Catholicism
In response to requests from French bishops, Pope Pius IX promulgated the feast of the Sacred Heart in 1856. The basilica itself was consecrated on October 16, 1919.

Since 1885 (before construction had been completed), the Blessed Sacrament (a consecrated host which has been turned into the Body and Blood of Jesus Christ during Mass) has been continually on display in a monstrance above the high altar. Perpetual adoration of the Blessed Sacrament has continued uninterrupted in the Basilica since 1885. Because of this, tourists and others are asked to dress appropriately when visiting the basilica and to observe silence as much as possible, so as not to disturb persons who have come from around the world to pray in this special place.

In popular culture
The area before the basilica has featured in many films, notably in 2001 film Amélie (Le fabuleux destin d'Amélie Poulain). The basilica can also be seen in the window in background of the Audrey Hepburn film Sabrina while she is writing home to her father before returning home to America. It also appears in the opening shot of Ronin.
In the anime series Noir, the lead character Mireille Bouquet has a rendez-vous with Remi Breffort, a high profile member of the secret organization Les Soldats, inside the basilica.

The basilica is also mentioned in the song Evil and a Heathen by Scottish indie rock band Franz Ferdinand from their 2005 album You Could Have It So Much Better.
It appears famously at the end of C'était un rendez-vous, a short film which subsequently was used by the rock band Snow Patrol for their video "Open Your Eyes".
The music video for "Two Hearts Beat As One", by Irish rock band U2, was shot in the Basilica and around Montmartre.
In Danish singer-songwriter Tina Dico's fourth album release, Count To Ten, the sixth track is titled after and gives reference to the basilica.
Australian pop duo Savage Garden's newest music video for "Truly Madly Deeply" was shot there sometime in 1997.