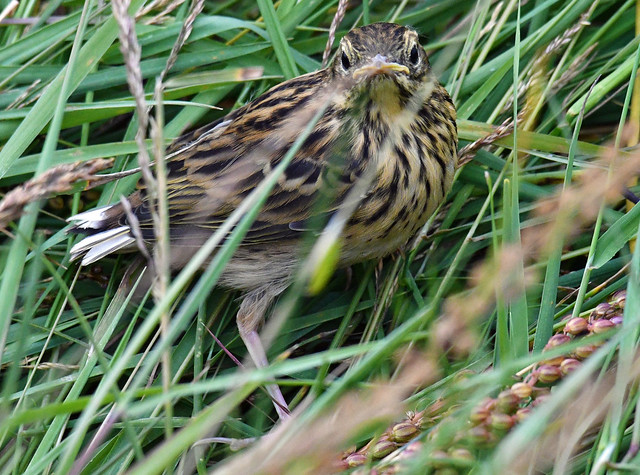 Status: One of the commonest bird species in Ireland, favouring rough pastures and uplands.

Conservation Concern: Previously Green-listed, though Red-listed in Ireland since 2014, following sharp breeding declines thought to be a result of the unusually severe winters of 2009/10 and 2010/11. Populations have shown signs of significant recovery since. The European population is considered to be Secure.

Identification: A very non-descript bird when seen in the field. Meadow Pipits are brown above with black streaking on a white breast and belly. The beak and legs are pinkish. It looks very similar to a Skylark, but that species is slightly larger than a Meadow Pipit and has a broad white stripe above the eye. Rock Pipit is dark grey on the back and has much denser dark streaking on the breast.

Call: A rapid “vist-vist-vist” call is given when alarmed or flushed from cover. Performs a short song flight from a post, which acts as a song. The bird flies straight up, before parachuting back down to the original post.

Diet: Feeds on Invertebrates such as craneflies, mayflies and spiders and to a lesser extent on seeds.

Breeding: Very widespread breeding species in Ireland, with around 500,000 to 1,000,000 pairs. Found in bogs, uplands and areas of scrub and pasture.

Wintering: Generally sedentary, but moves to lowland areas from breeding sites in uplands. Significant numbers of European birds move to Ireland in winter.

Where to See: Common throughout Ireland.

The Meadow Pipit looks like a Song Thrush, but is only slightly larger than a Great Tit. The male and female Meadow Pipits are alike. Typically, the upperparts are grey to olive-brown in colour with darker streaks. The underparts are pale grey or buff coloured with bold streaks and spots on the breast and flanks. The belly and outer tail feathers are white. The legs are a dull pink. Juvenile Meadow Pipits are pinkish-buff and lack the dark streaks on the flanks. The Tree Pipit is very similar to the Meadow Pipit, but its general appearance is cleaner with more distinct markings, the legs are a paler pink and the hind claw is much shorter

Breeds in middle, upper middle, and upper latitudes of west Palearctic, from temperate through boreal to fringe of arctic climatic zones, and from continental to oceanic regimes, accepting rainy, windy, and chilly conditions, but avoiding ice and prolonged snow cover as well as torrid and arid areas, within rather narrow temperature range of 10-20 degrees. Eurasian mainland chooses, as a ground-dweller, open areas of rather low fairly complete vegetation cover. Avoids extensive bare rock, stones, sand, soil, and close-cropped grass of herbage, and on the other hand tall dense vegetation, including woods, telegraph wires, stone walls, and other points of vantage.

Anthus pratensis is a widespread breeder across much of central and northern Europe, which constitutes >75% of its global breeding range. Its European breeding population is very large (>7,000,000 pairs), and was stable between 1970-1990. Although there were declines in countries such as the United Kingdom, France and Sweden during 1990-2000, the species was stable or increased across most of its European range? including in Norway and Russia?and probably declined only slightly overall.

Diet based on invertebrates, with some plant seeds in autumn and winter. Feeds almost exclusively on ground, walking at steady rate picking invertebrates from leaves and plant stems. Occasionally takes insects in flight which it has disturbed but never flies after them.