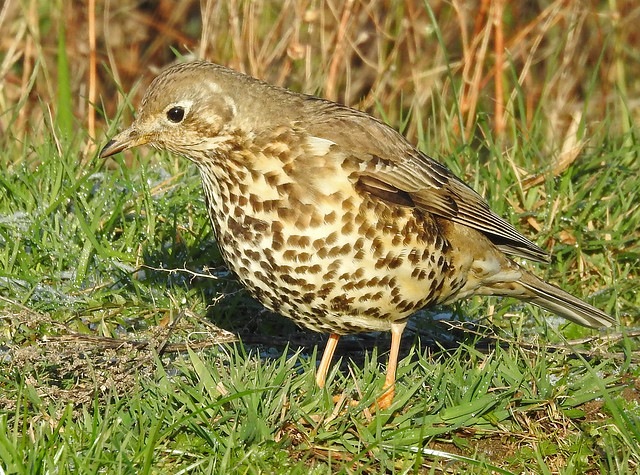 Conservation Concern: Green-listed in Ireland. The European population is considered to be Secure.

Identification: About the same size as a Blackbird. Has a very upright stance in comparison to either Song Thrush or Blackbird. The face is white with some black markings, while the eye has a distinct white eyering. The crown, nape and back of the Mistle Thrush are plain brown. The throat and upper part are white with some black streaks. This is bordered by a brownish smudge across the breast, with the rest of the underparts white with black spots. The rump is pale grey-brown, while the tail is brown - the outer tail feathers being white. The legs are pink in contrast to the dark colouring of the Fieldfare.

Call: The most commonly heard call is a loud, rattling “prrrrt”, usually given when a predator is spotted or another bird lands in a favoured berry tree. The song is very similar to that of the Blackbird, though less musical and the phrases are more widely spaced.

Diet: In winter, Mistle Thrushes feed mainly on berries and will vigorously defend a favoured tree from all other birds. Also feeds on insects and earthworms.

Breeding: Breeds throughout Ireland, though less commonly in the south. Mistle Thrushes are less frequently seen in suburban gardens than Blackbirds and Song Thrushes, favouring larger parks and rural areas.

Wintering: Irish Mistle Thrushes are resident, with some limited immigration of Continental birds.

Where to See: Common throughout Ireland.

Breeds in west Palearctic, historically in more continental upper band middle latitudes than other thrush, but has during last 200 years extended into oceanic zone, especially in Britain and Ireland. Despite bold abn robust appearance and conduct in wind and rain, is vulnerable to cold, especially snow and ice, and avoids arid and very warm areas. In mountain regions prefers middle altitudes. In boreal, temperate, and Mediterranean zones, widely but thinly distributed where is conjunction of stands of tall tree with open grassland or short herbage, not too close to human settlements and with ready access to seasonal berry fruits.

Turdus viscivorus is a widespread breeder across much of Europe, with >50% of its global breeding range occurring in the region. Its European breeding population is very large (>3,000,000 pairs), and was stable between 1970-1990. The species remained stable overall during 1990-2000, with increases in the sizeable German population at least partly compensating for declines elsewhere—notably in France and the United Kingdom. Crucially, the key population in Russia remained stable.
This thrush inhabits north-western Africa and a major part of Europe and western Asia, reaching India and Mongolia to the east. It breeds in coniferous forests, some deciduous forests and open habitats with isolated large trees. It has undergone a strong expansion at the beginning of this century, but is seems now to be stable and in a few regions a decline has even been reported. In southern and western Europe it is sedentary. The population of the European Union (12 Members States) is estimated at 1.2-2.2 million breeding pairs and the total European population at 1.8-4.1 pairs.

Wide variety of invertebrates, in autumn and winter also berries. Feeds on ground and in trees and bushes. To take flying insects will fly up high in the air like Starling.

This species has a large range, with an estimated global Extent of Occurrence of 10,000,000 km². It has a large global population, including an estimated 6,000,000-15,000,000 individuals in Europe (BirdLife International in prep.). Global population trends have not been quantified, but the species is not believed to approach the thresholds for the population decline criterion of the IUCN Red List (i.e. declining more than 30% in ten years or three generations). For these reasons, the species is evaluated as Least Concern. [conservation status from birdlife.org]

Breeds April-June in West and Central Europe, February in Britain, late March in North Africa, April-May in Finland. Nest site is built on stout branch against trunk of tree, or on fork of horizontal branch, also on ledge of building, cliff-face, or bank. Nest is a large cup comprising 3 layers - outermost of sticks, grass, moss, and roots, loosely woven then compacted by middle layer of mud, often containing grass and leaves and some rotten wood which sometimes penetrates to outside of nest; thicker inner lining of fine grasses, sometimes with pine needles. 3-5 eggs, incubation 12-15 days, by female, rarely assisted by male.

Varies from migratory in north and east of range to sedentary or dispersive in west and south, though even in least migratory populations some birds make substantial movements. Some central and south European birds winter within breeding range of the relatively sedentary deichleri of north-west Africa, Corsica, and Sardinia. Main winter range of central European and Scandinavian birds extends from Belgium through western and southern France to north-east Spain. British birds tend to be sedentary or make movements of less than 50 km, though proportion travel considerably further, some to France. Autumn migration in Britain mainly August-November although juveniles and adults may form flocks in July and start to move south. Return to breeding areas in spring is early. First birds appear on central European breeding grounds in February. In central Sweden, average arrival date 27 March.