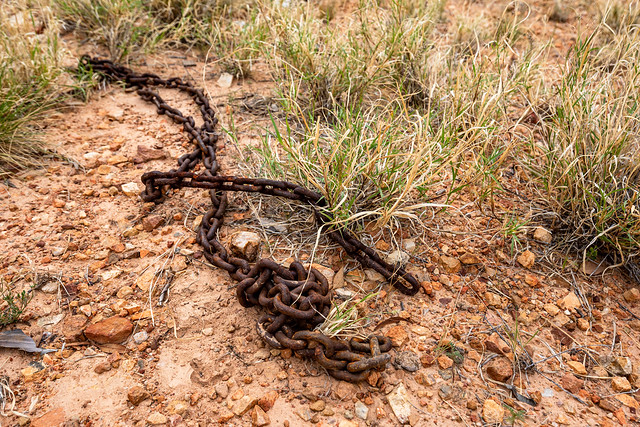 The discovery of the MacGregor ore body was credited to Jack White in 1904. A Victorian buyer, James Peberdy, bought a parcel of 7 leases; the Balaclava, Sabastapol, Greater Esmond, Inkerman, Grand Central, Wallaroo, and Wee MacGregor in 1905. James Peberdy then created the MacGregor Cloncurry Copper Mines Company. A company store was set up on the lease, managed by the mine accountant, Frank Knox. A small calico house on a wooden frame was built for the storekeeper, Reg Gyton. W. Hinkle of Cloncurry built for James Perberdy and his sister a large highest wooden home, overlooking the Wallaroo Mine. A haphazard collection of tents, galvinised iron and bough sheds appeared along the track connecting the leases. On an elevated area south of the leases, John Frost built the MacGregor Hotel in 1909.

Towards the end of 1910, ore reserves were confirmed, finance raised, and deliberations began as to whether to build a smelter at the site or build a private rail line to transport the ore to the smelters at Friezland.

During this time, Hampden and Mount Elliot mining companies were both trying to increase their ore reserves. The rich MacGregor ore had not gone unnoticed and both groups approached the lease holder, James Peberdy. In 1913, Perberdy's MacGregor Mining Company passed into the hands of Hampden Mining Company and Thomas Warrick took over management of the company.

Hightville was surveyed in 1913 by the government surveyor E. Dighton and was so named for its location upon the high ridges. The MacGregor Hotel was taken over by Pierce Edwards. William Jones was postmaster and had a store from 1913 to 1916. The blacksmith from 1911 to 1912 was William Denison. The few families in the town were those of the min managers and publicans. Until it burn down in 1914, the MacGregor Hotel passed through the hands of Dora Power, Mrs O'Toole, and Jim Commerford. The miners then waited for the arrival of the Cosmopolitan Hotel which was being moved from Ravenswood. The Cosmopolitan was dragged into the area in time to hear that Highville was not a suitable location for a rail terminus. A request for another townsite was made and a government surveyor was recalled. As soon as the last peg was driven in December 1914, the exodus from Highville to the new town of Ballara began. The company store and post office remained at Highville.

The Wee MacGregor mines opened a school at Hightville with Miss Case as the first teacher. Children came to school in Hightville from Ballara and more families moved in. Eventually, a public school was built. The Ballara school children sometimes stole a pump car to run down the two miles to Ballara, using a stick as a brake with occasionally near-tragic results.

While the town was being relocated, the company 2' gauge rail line and tunnel began construction, and the government 3"6 gauge line approached Ballara from the MacGregor Junction just south of Malbon. The 3 shafts of Wallaroo, Grand Central, and Wee MacGregor had wooden head frames erected. The steam winders and boilers arrived, were installed, and tested. in July 1915, the mines were ready for protection and the rail had arrived at Ballara. A Krausse 0-6-0 locomotive with 50 tones of ore headed east for the first time from the mine to the rail terminus at Ballara. It stopped on the elevated ore ramp and tipped ore from the small 5 ton wagons into the large 20 ton wagons on the 3"6 government line below. The pilot trip of ore to the smelters at Kuridala ran without incident and so began the mining operations.

On two occasions, the Hightville School and the Wallaroo Mine headframe were condemned because of termites, and a fire in the winderhouse of the MacGregor shaft compounded the problems when the winding engine was damaged beyond repair. An urgent telegram was sent to Earle Huntley at Kuridala, telling of the double failure. The answer was prompt, "Close Wallaroo, transport winder engine to MacGregor, resume production". The Wee MacGregor mine was considered the 'plumb' of the field. The mine had two shafts with three drives of over 6000 feet, providing ore from 3 to 18% copper. Monthly ore receipts of over 1200 tons were not uncommon.

In November 1918, the Great War that supported the mineral field throughout its early prosperous years, came to an end and the price of copper dropped below production costs. Two weeks after the signing of the armistice, the Hampden Mining Company smelters were shut down for their annual maintenance, and this closure saw the end of production for the MacGregor mine area. During the three years of operation (July 1915 to November 1918), the area produced more the 44 000 tons of copper ore.