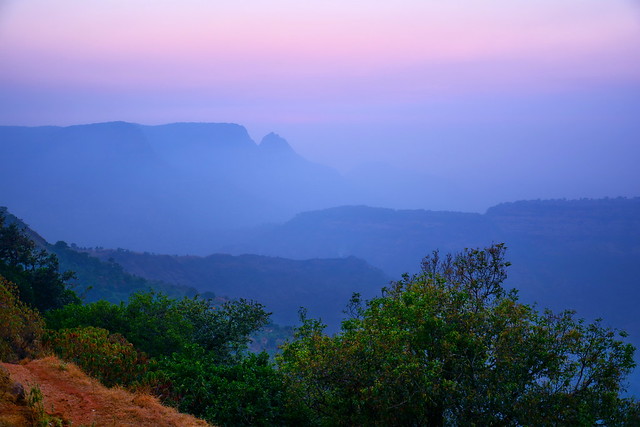 India - Maharashtra - Western Ghats - View From Matheran Hill Railway - 63d
The Western Ghats or Sahyadri are a mountain range that runs almost parallel to the western coast of the Indian peninsula, located entirely in India. It is a UNESCO World Heritage Site and is one of the eight "hottest hotspots" of biological diversity in the world. It is sometimes called the Great Escarpment of India. The range runs north to south along the western edge of the Deccan Plateau, and separates the plateau from a narrow coastal plain, called Konkan, along the Arabian Sea. A total of thirty nine properties including national parks, wildlife sanctuaries and reserve forests were designated as world heritage sites - twenty in Kerala, ten in Karnataka, five in Tamil Nadu and four in Maharashtra.

The range starts near the border of Gujarat and Maharashtra, south of the Tapti river, and runs approximately 1,600 km through the states of Maharashtra, Goa, Karnataka, Kerala and Tamil Nadu ending at Kanyakumari, at the southern tip of India. These hills cover 160,000 km2 and form the catchment area for complex riverine drainage systems that drain almost 40% of India. The Western Ghats block southwest monsoon winds from reaching the Deccan Plateau. The average elevation is around 1,200 m.

GEOLOGY
The Western Ghats are the mountainous faulted and eroded edge of the Deccan Plateau. Geologic evidence indicates that they were formed during the break-up of the supercontinent of Gondwana some 150 million years ago. Geophysical evidence indicates that the west coast of India came into being somewhere around 100 to 80 mya after it broke away from Madagascar. After the break-up, the western coast of India would have appeared as an abrupt cliff some 1,000 m in elevation.

Basalt is the predominant rock found in the hills reaching a thickness of 3 km. Other rock types found are charnockites, granite gneiss, khondalites, leptynites, metamorphic gneisses with detached occurrences of crystalline limestone, iron ore, dolerites and anorthosites. Residual laterite and bauxite ores are also found in the southern hills.

MOUNTAIN RANGES
The Western Ghats extend from the Satpura Range in the north, go south past Maharashtra, Goa, through Karnataka and into Kerala and Tamil Nadu. Major gaps in the range are the Goa Gap, between the Maharashtra and Karnataka sections, and the Palghat Gap on the Tamil Nadu and Kerala border between the Nilgiri Hills and the Anaimalai Hills.

The mountains intercept the rain-bearing westerly monsoon winds, and are consequently an area of high rainfall, particularly on their western side. The dense forests also contribute to the precipitation of the area by acting as a substrate for condensation of moist rising orographic winds from the sea, and releasing much of the moisture back into the air via transpiration, allowing it to later condense and fall again as rain.

The northern portion of the narrow coastal plain between the Western Ghats and the Arabian Sea is known as the Konkan Coast or simply Konkan, the central portion is called Kanara and the southern portion is called Malabar region or the Malabar Coast. The foothill region east of the Ghats in Maharashtra is known as Desh, while the eastern foothills of the central Karnataka state is known as Malenadu. The largest city within the mountains is the city of Pune (Poona), in the Desh region on the eastern edge of the range. The Biligirirangan Hills lie at the confluence of the Western and Eastern Ghats.

SAHYADHRIS
The major hill range starting from the north is the Sahyadhri (the benevolent mountains) range. This range is home to many hill stations, including Matheran, Lonavala-Khandala, Mahabaleshwar, Panchgani, Amboli Ghat, Kudremukh and Kodagu. The range is known as Sahyadri in Maharashtra and Karnataka and as Sahya Parvatam in Kerala.

NILGIRIS
The Nilgiri mountains are in southwestern Tamil Nadu and are home to the town of Ooty. The Bili giri rangana Betta southeast of Mysore in Karnataka, meet the Shevaroys (Servarayan range) and Tirumala range farther east, linking the Western Ghats to the Eastern Ghats.

ANAIMALAI HILLS
South of the Palghat Gap are the Anaimalai Hills, located in western Tamil Nadu and Kerala. Smaller ranges are further south, including the Cardamom Hills.

In the southern part of the range is Anamudi peak 2,695 metres in Kerala the highest peak in Western Ghats. Chembra Peak 2,100 metres, Banasura Peak 2,073 metres, Vellarimala 2,200 metres and Agasthya mala 1,868 metres are also in Kerala. Doddabetta in the Nilgiri Hills is 2,637 metres. Mullayanagiri is the highest peak in Karnataka 1,950 metres. The Western Ghats in Kerala and Tamil Nadu is home to many tea and coffee plantations.