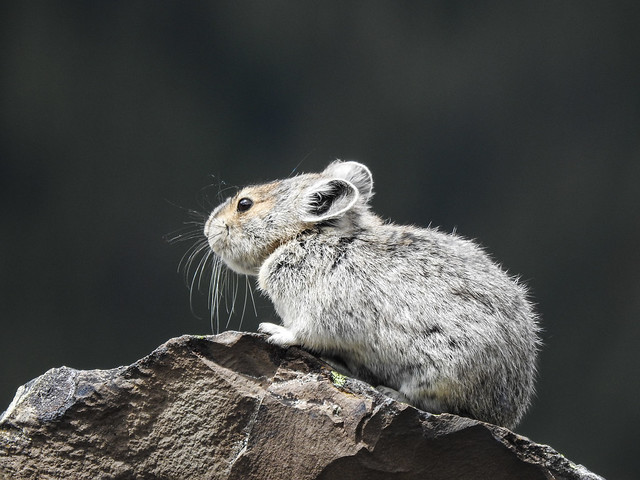 American Pika / Ochonta princeps
Tuesday, 23 November 2021: here comes the snow, at 11: 00 am! On top of the peeling paint issue, a hail PDR technician looked at my car and apparently there is slight hail damage over pretty well the whole car from the dreadful hail storm back in July 2021 - nothing that I noticed myself, and I had checked! To avoid the car being repainted twice, obviously I will have to get the hail damage fixed and then it gets repainted anyway because of the peeling paint issue. Just contacted my Insurance Company to get a claim opened, as it will cost more than $5,000 for the hail repair. Of course, all this will add on extra time that I am without my vehicle. Am I fed up of all this? Lol, you guess! So petty, though, compared to what so many other people are having to deal with at the moment.

A few more odds and ends from my archives. I am adding the description that I wrote under a different image taken on the same outing. So far, three and a half weeks without my car. Still more weeks to follow before the paint peeling issue will be fixed. However, in a few days' time, there is supposed to be a loaner car for me. A kind friend offered to help me get this loaner back to my place, so I need to check with him. A driving phobia is no fun and is such a pain! Will only be driving the sedan very locally, not out of the city on the back roads which will soon be covered in snow. In fact, snow is forecast for tomorrow, the day before I might get the loaner. Not good timing.

"Yesterday morning, 30 June 2019, I woke up earlier than usual. Once I was on my computer, I checked the weather forecast and saw raindrop icons in the forecast for the next week, but yesterday was for sun. I knew what I had to do! Luckily, I had a tank full of gas, so I grabbed both cameras and a snack or two, and headed out the door. I must be the only person who hadn't been to Kananaskis recently and taken photos of the tiny Pikas (Rock Rabbits), and that was my destination.

This is a long weekend for Canada Day, and my plan had been to keep off the roads, as I was sure they would be busy, making it more difficult to stop whenever I wanted, to take a photo or two. However, when I saw the weather forecast, it changed my mind. Sunshine, blue sky with clouds, made it a perfect day to be out - I'm sure you agreed, Bonnie : )

A day in Kananaskis is always great, but sometimes 'great' turns out to be fantastic! Can't believe how lucky I was, not just in the mountains, but on the journey there and, at the end of the day, calling in at my 'usual' area closer to home.

I suspect the Pika is most people's favourite - around 6 inches long and almost impossible to see against the mountainside of broken rocks that are the same colour as the Pika's fur. Starting to believe that maybe I was going to be out of luck, the first one appeared, racing in and out and over and between the endless, sharp rocks. Take your eyes off the animal and you stand a good chance of not being able to find it again. Then a second one appeared, a baby - which I think is the one on this photo. It perched itself on top of this rock and simply stayed there for a few minutes. Several of my photos show the eyes closing slightly. However, eventually it did move, and off it went. When it appeared not too far away, I caught sight of it and thought at first it was a mouse, ha. So tiny!

While I was searching for a Pika, a herd of Bighorn Sheep had come down the massive mountain side and, as they usually do, gathered right in the middle of the road to lick salt left by vehicles. After quite a time, there was an almighty BOOM that startled me and a handful of others. We hadn't noticed a Park's truck arrive, armed with 'bangers' to make the Sheep move from the road. Once the Park's person had left, the Sheep returned to the road. There were several young ones along with the females.