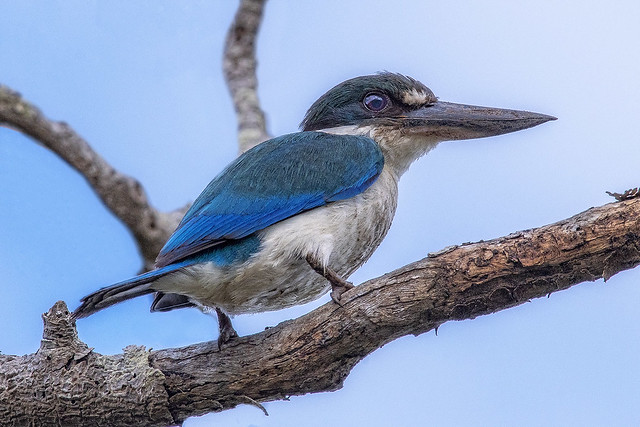 creatures of the mangroves - collard (now torresian) kingfisher
Many thanks for your visits, faves and comments. Cheers.

Collard (Mangrove) Kingfisher with a crab (or what's left of it)
Scientific name: Todiramphus chloris
The Collared Kingfisher is a medium-sized kingfisher (body length of 23-27 cm) with a large, black kookaburra-like bill. These Kingfishers are dull olive-green above and white on the underbody, with a dark brownish-olive cap, white spot on the lores (between the bill and the eye) and a broad white collar on the neck that extends to join the white underbody. The uppertail and lower edge of the folded wings are blue. The Collared Kingfisher is easily confused with the much more common and widespread Sacred Kingfisher Todiramphus sanctus. The two species have a very similar shape but the Collared Kingfisher is considerably larger and stockier, with a much longer and heavier bill. In the Collared Kingfisher the loral spot, underbody and collar are white, whereas they are buff in the Sacred, and the Sacred also has more blue on the folded wing. The Forest Kingfisher Todiramphus macleayii also occurs in the same region as the Collared but is much smaller, with a finer bill, and has strongly blue upperparts and white wing-patches (usually only obvious in flight). Birds are usually seen singly or in pairs. Its flight is swift and direct, and usually low over water or vegetation. The main call is a loud, strident, deliberate two or three note call, simialr to that of the Sacred Kingfisher.
Distribution: In Australia, the Collared Kingfisher extends around the northern coasts, from Shark Bay in northern Western Australia to the estuary of the Tweed River in far north-eastern NSW, with rare scattered records south of there, mainly south to the Clarence River. Beyond Australia, the species is widely distributed from the Red Sea and Arabian Gulf in the Middle East, through southern and south-eastern Asia to Indonesia and New Guinea and east to the Solomon Islands, Vanuatu, Fiji, Tonga and Samoa.
Habitat and ecology: Collared Kingfishers are virtually restricted to mangrove associations of estuaries, inlets, sheltered bays and islands, and the tidal flats and littoral zone bordering mangroves. They sometimes occur in terrestrial forests or woodlands bordering mangroves, where they will nest in holes in trees or in arboreal termitaria. They are sometimes seen in streets or gardens in built-up areas bordering mangrove vegetation. Nests are usually in holes in trunks of large, live or dead mangrove trees, though they sometimes nest in hollows or in arboreal termite nests in large eucalypts or paperbarks adjacent to mangroves or estuarine foraging habitats. They are often seen perched on rock walls, jetties, piles or on the ground on tidal flats. They also sometimes occur in parks and gardens along foreshores. Mostly take food from the ground, from the surface of mud and sand, mainly along seaward fringe of mangroves. Sometimes take food from shallow water or from air. The diet consists mostly of crustaceans, especially crabs, but they also take insects, small fish, and lizards. They have also been reported to occasionally take young birds.
Breeding is usually in spring and summer, with clutches observed in September to December, and young birds from October to January. Birds usually lay three eggs, but clutches of two to four recorded. Young leave the nest about 1 month after hatching.
(Source: NSW Government, Office of Environment nd Heritage)
__________________________________________