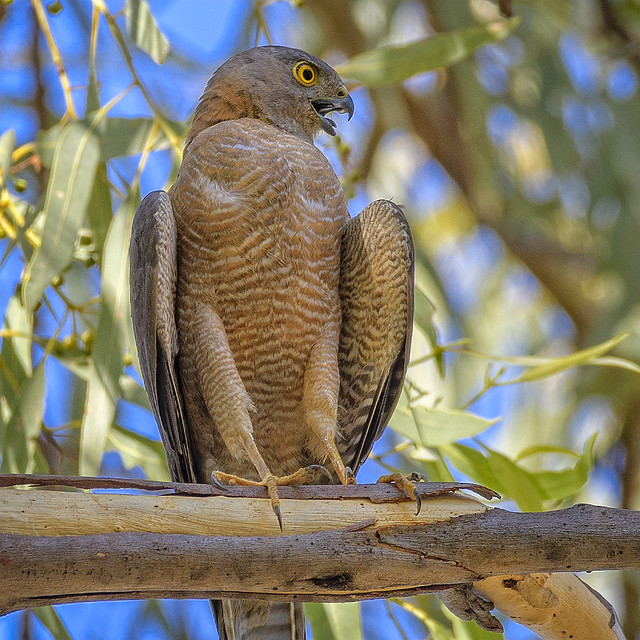 40.5°C, alice river - brown goshawk #3
Your comments and faves are greatly appreciated. Many thanks.

Brown Goshawk
Scientific Name:Accipiter fasciatus
Description: Brown Goshawks are medium-sized raptors (birds of prey). They have a brown head, slate-grey to brown upperparts with a red-brown collar across the upper nape of the neck, and finely barred underparts of red-brown with white. The rounded wings are dark brown to grey above and buff to reddish brown below with darker wingtips, and the long rounded tail is grey with dark bars. The long legs are yellow, with reddish brown feathering about the thighs. The eye is bright yellow. Males are smaller than females. Young birds have grey-brown eyes, with brown, streaky plumage. There are several subspecies, with the northern sub-species, didimus, being generally smaller and paler. The Brown Goshawk is widespread but secretive.
Similar species: The Brown Goshawk is very similar in plumage to the related raptor (bird of prey) species, the Collared Sparrowhawk, A. cirrhocephalus, which has a notched or square-tipped tail rather than rounded, and has thinner legs and toes and lacks the Brown Goshawk's heavy brow. Female Sparrowhawks are around the same size (35 cm - 38 cm) as male Brown Goshawks, but males are significantly smaller (29 cm - 33 cm).
Where does it live?
Distribution: Brown Goshawks are found across Australia in suitable habitats. They are also found in New Guinea, the Lesser Sundas, New Caledonia and the New Hebrides.
Habitat: The Brown Goshawk is found in most timbered habitats.
Seasonal movements: Northern birds are sedentary, but southern birds tend to be nomadic, and immature birds move north when dispersing during the winter months.
Feeding: Brown Goshawks feed on small mammals, with rabbits a particularly important prey item, as well as birds, reptiles and insects and sometimes, carrion (dead animals). They hunt stealthily from a low, concealed perch, using sudden, short bursts of speed to pounce onto prey and use their long legs and clawed toes to reach out and strike it. It will occasionally stalk or run along the ground after insects. Prey items are taken back to a perch to be partially plucked (mammals, birds) and then eaten.
Breeding: The Brown Goshawk builds its large stick nest on a horizontal limb of the tallest tree available, often near a waterway or at the edge of a forest. It may sometimes re-use an old raptor's nest. The nest is kept lined with fresh eucalypt leaves. Both parents defend the nest and surrounding territory aggressively. Established pairs will reuse the same area year after year, and often use the same nest. The female incubates the eggs, with the male helping when she needs to leave the nest to feed. The male does the bulk of the hunting to feed the young, which remain dependent on their parents for up to three weeks after fledging. Young birds disperse widely, with distances of up to 900 km not uncommon, to find and establish their own breeding territories.
Calls:A loud, rising 'keek-keek-keek'; also a slow, drawn out 'ee-you-wick, ee-you-wick'. Females have deeper voices than males.
Minimum Size: 37cm
Maximum Size: 55cm
Average size: 46cm
Average weight: 454g
Breeding season: July to December
Clutch Size: 2 to 4 eggs, usually 3
Incubation: 33 days
Nestling Period: 35 days