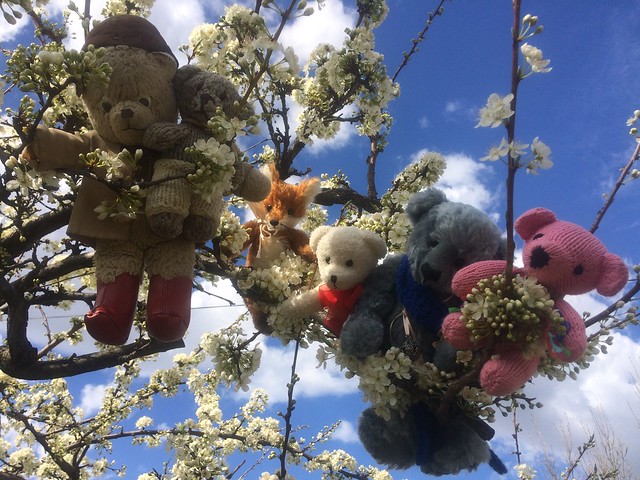 PADDY: "Yes Rosie, it's spring time here, so there are lots of pretty blossom around."

ROSIE: "What kind of blossom is that Paddy?"

PADDY: "Well..." *Squints and looks up.* "From here I can't be exactly certain, but I'd say it's probably an almond blossom."

PADDY: "Well, I'd need to get closer to confirm the species for certain."

SCOUT: "Shall we take a closer look then, Paddy."

ROSIE: "Oh what a wonderful idea, Scout! Let's climb the tree! Come on!"

BOGART: "Oh goody! I do enjoy a good climb! Wait for me!"

JAGO: "Oh don't worry Paddy. It will be fine, and if we climb the tree, you can inspect the blossoms at close quarters. Come along."

SCOUT: *Looks closely at blossoms.* "Wow! These blossoms are even prettier close up."

ROSIE: "And they smell beautiful too!"

FREDDY: "And they are very soft against fur."

BOGART: "And look! The bees must love the almond blossoms too! Look how many there are."

JAGO: "They will make lots of delicious honey with the pollen from the blossoms, Bogart."

JAGO: "Yes, Bogart. There are lots of bees, so that means lots of honey!"

SCOUT: "Hhhhmmm... all this talk of honey is giving me a grumbly tummy!"

SCOUT: "Right! Let's all go home and have some honey sandwiches! Home isn't far from here. I can see our roof from here!"

SCOUT: "Except what, Paddy?"

PADDY: "Except, how do we get down from this tree?"

BOGART, JAGO, ROSIE and FREDDY: "Yes Scout. How d we get down from this tree?"

PADDY: "No. You didn't, Scout, and we need Daddy's help to get down!" *Looks about.* "Oh look! Here comes Daddy now! Thank goodness!"

DADDY: "Oh! Scout! You startled me from way up there!"

SCOUT: "I surprised you didn't we Daddy?"

DADDY: "You certainly did you cheeky little bear! I wasn't expecting to see you up in this almond tree."

PADDY: "See! I was right, it was an almond tree, everybear!"

DADDY: "Goodness! Paddy! Jago! Rosie! Bogart! Freddy! You are all up the almond tree!"

PADDY: "Ahem!" *Clears throat.* "Daddy! Daddy, we appear to be stuck in this rather lovely almond tree. Can you help get us down please? Only if it isn't too much trouble Daddy." *Blushes pink beneath plush fur.*

DADDY: *Tutts and shakes head as he reaches for Paddy, Scout, Jago, Rosie, Bogart and Freddy to rescue them.*

PADDY, SCOUT, BOGART, JAGO, ROSIE and FREDDY: *Climb into Daddy's arms one by one and hold on as he lowers them to the ground.*

SCOUT: "Now we can go home and have honey sandwiches!"

DADDY: "Yes of course we can. Ahem..." *Clears throat.* "But there must be no more climbing trees on the way home. We must stick to the path."

PADDY, SCOUT, BOGART, JAGO, ROSIE and FREDDY: "Hoorah!" *Begin walking home in front of Daddy, who keeps a sharp eye on them all to make sure they do not deviate from the path home.*

Now that Scout’s cousin Rosie has arrived, and brought with her the spring sunshine after a great many grey, wet and wintery days, Paddy, Scout, Bogart, Jago, and Freddy are showing her around the neighbourhood. Being born bear explorers, Paddy and Scout are always taking the opportunity to wander through people's gardens, taking Bogart, Jago and Freddy with them, that is if they aren’t being led by Rosie, who is by her own admission, quite a tenacious bear. This evidently also includes climbing random almond blossom trees! On the way they can smell the blossoms and flowers… except maybe cat’s pee daisies!

Rosie is Scout's cousin, because like Scout, she is a free trade knitted bear from Africa. She was made in Kenya by one of the Kenana Knitters, Martha Wanjira. She is made from home spun and dyed wool. She was a gift to me from two very dear friends, includng the one who gave Scout to Paddy.

Bogart has travelled all the way from Georgia, via Alabama as a gift to me from a friend. He has lovely Southern manners and seems to be a fun and gentle soul with an inquisitive nature.

Jago was a gift from a dear friend in England. He is made of English mohair with suede paw pads and glass eyes. He is a gentle bear, kind and patient who carries an air of calm about him. He is already fitting in with everyone else very nicely.

preview: Paddington, Scout and the Almond Blossom Tree on Flickriver