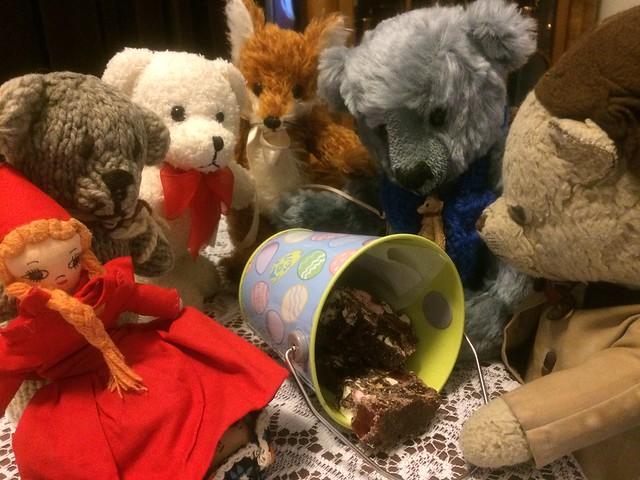 Paddington Teaches Scout a Lesson
SCOUT: *Grunts and groans noisily as he pulls an Easter bucket across the table.

PADDY: "Are you alright, Scout? What are you doing"

JAGO: "Scout where are you going to with that bucket?"

JAGO: "What are you talking about, Scout?"

SCOUT: "Well, you know how Daddy was naughty and fed us our own Easter eggs and didn't tell us?"

PADDY: "Well, I wouldn't put it quite like that, Scout."

JAGO: "What does that have to do with saving the day, Scout?"

SCOUT: "Well, I was exploring the refrigerator..."

SCOUT: "That's alright, Bogart. Now, where was I?"

FREDDY: "You were exploring the refrigerator, Scout."

SCOUT: "Yes, thank you Freddy. I was in the refrigerator and I came across a bucket, and whilst it doesn't have eggs in it, it's full of deliciously lovely big chunks of chocolate full of nuts, Turkish delight and marshmallows! Look!" *Pushes over Easter bucket.*

BOGART, FREDDY, JAGO and PADDY: *Look at what spills out of the Easter bucket.*

BOGART: "What is Rocky Road, Paddy?"

PADDY: "Rocky road is a type of no-bake slice made up of milk chocolate and marshmallows along with other ingredients, which tend to vary by country."

PADDY: "But we can't eat this, Scout, Jago, Freddy and BOGART."

PADDY: "We can't eat this because this is Daddy's special rocky road. Did you ask Daddy if we could have it, Scout?"

PADDY: "Scout! You know that it is up to Daddy if he shares his goodies with us."

SCOUT: "But Daddy always shares his goodies with us, Paddy. I'm sure he wouldn't mind!"

PADDY: "Scout! Daddy likes sharing with us because it is his choice to do so. You can't just go and appropriate things that belong to him because he might like to share them with us, but don't ask first. It is Daddy's choice to share with us."

JAGO: "Paddy is right, Scout. It is up to Daddy as to whether he shares with us."

BOGART: "You aren't a thief, Scout! You are a good bear."

FREDDY: "But taking something without asking is a little bit like stealing, Scout."

DADDY: "Who is going to gaol?"

SCOUT: "Oh Daddy! Please don't send me and Dolly to gaol! We didn't mean to steal your rocky road! Please... please... please!" *Starts to cry.* "I should have asked first! I know that now! I've learned my lesson!"

DADDY: "Oh Scout! Please don't cry! It's alright. You won't go to gaol. I know that you would never steal anything intentionally. I am glad that you have learned your lesson about asking first, though."

SCOUT: "Oh I have Daddy! Thank you for not sending me and Dolly to gaol!" *Runs up and cuddles Daddy.*

DADDY: "That's alright, Scout. In fact, I'm glad that you have brought out my rocky road."

DADDY: "Yes Scout. It saves me having to do so. I was going to ask everybear... and fox, Freddy... if they would like to have a rocky road tea party!"

The Rocky Road dessert was first created in Australia in 1853. Unscrupulous businessmen took confectionery items that had been spoiled by their journey from Europe and mixed them with local nuts as well as low quality chocolate to try to recover them instead of throwing them out. In British influenced areas it was previously referred to as 'Tiffin' but the Australian/American name of rocky road has now come to predominate in Britain.

Jago is a recent addition to my ever-growing family. A gift from a dear friend in England, he is made of English mohair with suede paw pads and glass eyes. He is a gentle bear, kind and patient who carries an air of calm about him. He is already fitting in with everyone else very nicely.

Bogart has travelled all the way from Georgia, via Alabama as a gift to me from a friend. He has lovely Southern manners and seems to be a fun and gentle soul with an inquisitive nature.

Travelling all the way from London, Cousin Paddington was caught in transit thanks to the Coronavirus pandemic, so it looks like he is stopping with us for a long while. That makes me happy, as the more I look into his happy, smiling face, the more attached I am becoming to him.