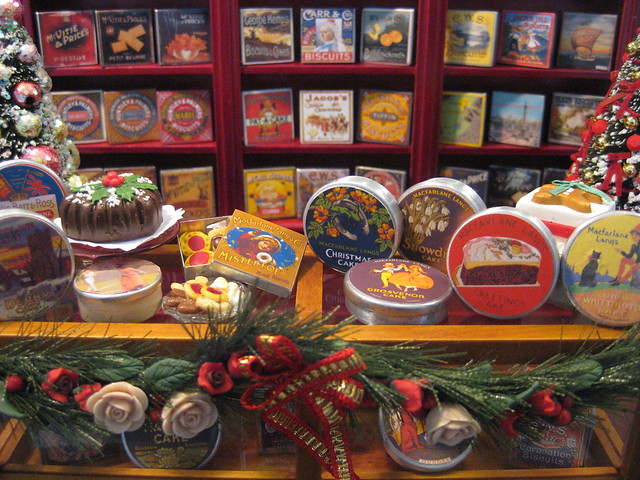 Christmas Shopping at Selfridge’s
Wickham Place is the London home of Lord and Lady Southgate, their children and staff. Located in fashionable Belgravia it is a fine Georgian terrace house.

Today however, we are not in Wickham Place at all, but are out with Her Ladyship as she, her unmarried sister Freda, who is visiting from America, and her Ladyship’s friend Mrs. Chisholm, another well-heeled resident of Belgravia, enjoy the pleasurable Edwardian pursuit of Christmas shopping in Selfridge’s. They are in the biscuits and cakes section of the department store.

“So, this is why Harry* left America,” gasps Freda as she looks about the cavernous hall filled with the answer to her every whim and desire om display.

“And he has revolutionised the shopping experience in London, Freda.” adds Lady Southgate.

“What on earth do you mean, Vera?”

“Well, before Harry came along, you didn’t browse, darling.”

“Why that’s ridiculous Vera,” Freda laughs. “How on earth are you supposed to choose what you want.”

“Well,” Mrs. Chisholm chimes in. “I used to order from the Army and Navy Store’s catalogue.”

Freda looks quizzically at her sister.

“Mail order catalogue store, which takes care of everything and sends it all over the empire.” Lady Southgate explains quickly. “When I first married Richard,” she continues. “When I walked into Harrods or Marshall and Snelgrove, and I asked to look at something, it meant that I had to buy it.”

“You made sure that what you asked to look at was what you wanted,” Mrs. Chisholm explains matter-of-factly.

“Definitely not the done thing.” Mrs. Chisholm adds in a solemn whisper.

“Now,” Lady Southgate says, walking up to a garlanded counter covered with elegant and brightly coloured tins. “I am looking for a nice tin of festive biscuits to give each of the housemaids.”

“What a peculiar notion,” Mrs. Chisholm says, chuckling as looking at Vera. “I alternate each year between giving my housemaids fabric to make themselves a new black or print dress to make sure they keep themselves looking decent**.”

“Who said anything about ‘festive’, Miss Harrison. No, it’s my Christian duty to make sure that they are well clothed and presentable.”

“Within your own home Margaret, under the watchful eyes of your guests,” Lady Southgate adds critically.

“What they wear outside my home is of no consequence to me, so long as they don’t parade it on the street outside my front door.” Mrs. Chisholm blusters, riled at being seen to be stingy at Christmas by her friend and her sister.

“Well, in the Harrison household, back in New York,” Freda explains. “It has always been a tradition to give the servants a nice hamper of festive treats, every Christmas!” She nods firmly at her sister, who affirms in reply with an equally sturdy nod.

“Here in England I have enjoyed introducing a little bit of American tradition to my household.” Lady Southgate says resolutely. “I think it’s the least they deserve after all the hard work they do, day in day out.”

“Well,” Mrs Chisholm adds as an afterthought. “I provide their caps, aprons, and lace cuffs for my housemaids, which is far more than some mistresses I know do.”

However, the two American sisters are no longer listening to her as they look to the shelves lined with gaily coloured biscuit tins.

“Ah,” Lady Southgate exclaims. “Now, this is why I bought you here, Freda.”

“Well, those too, but I wanted to send you home with a little slice of England.” She picks up a McFarlane Lang’s Christmas Cake in a beautifully decorated tin in her gloved hands.

“Oh I say! How terribly ‘Merrie England’!” Freda laughs in delight as she looks at the good luck horseshoe hanging amid a garland of Art Nouveau flowers on the lid of the tin.

The two American women laugh, whilst it is Mrs, Chisholm’s turn to look quizzically between the two.

*Harry Gordon Selfridge, Sr. was an American-British retail magnate who founded the London-based department store Selfridges. His twenty year leadership of Selfridge’s led to his becoming one of the most respected and wealthy retail magnates in the United Kingdom. He was known as the 'Earl of Oxford Street'.

**In Edwardian times, it was not uncommon for the mistress of a low wage paying house to give the maid material at Christmas to make herself two print dresses for morning uniform and two black dresses for evening uniforms.

This year the FFF+ Group have decided to have a monthly challenge called “Freestyle On The Fifth”. A different theme chosen by a member of the group each month, and the image is to be posted on the 5th of the month.

This month the theme, “Christmas magic” was chosen me.

For anyone who follows my photostream, you will know that I collect and photograph 1:12 size miniatures, so I thought that this slightly different scene, taking us away from domestic interiors to a commercial one to show the Edwardian love of excess, not least of all at Christmas, was a suitable choice. I also chose this for the theme because as a child, Christmas hampers of special foodstuffs only available for Christmas to, give and to receive, were very much a staple of Christmas.

You might think that it looks overly cluttered with tins of biscuits and cakes, but if you look at photographs from the Edwardian period, after the turn of the Twentieth Century, yet before the Great War, which is when the Wickham Place stories are set, you will find an abundance of clutter in Edwardian shops. It was a conscious decision by shopkeepers and owners to market as much and as many goods as they could to the wealthy upper and the middle-classes. As a result, every conceivable space was filled with merchandise from all over the world. Edwardian aristocrats, like Lord Southgate and his American wife followed the fashion set by their king, Edward VII, and ate lavish quantities of rich food. The early Edwardian era was also the start of the packaged food revolution, where tins of biscuits, cakes and chocolates became available, although only to the wealthy and the up-and-coming middle-classes. The working class still bought cheaper biscuits, often broken for the poorest because they were the cheapest, which they left the grocers with in paper bags. For the well-to-do, biscuit manufacturers like Huntley and Palmer, Peek Frean, and McVitie and Price produced extravagant biscuit tins which were beautifully decorated, or in some cases were even novelty items in themselves because of their shapes and patterns.

Fun things to look for in this tableaux include:

There are thirty-one different varieties of tinned biscuits and eight tinned cakes on display. All have been supplied by Shephard’s Miniatures or Beautifully Handmade Miniatures in England.

Within the glass cabinet display:

On the top of the glass display cabinet:

The Christmas garland on the front of the glass display cabinet is hand made by Karen Ladybug Miniatures in England.

The two Christmas trees to either side of the display are hand-made trees from dollhouse artisan suppliers in America.

McVitie's (Originally McVitie and Price) is a British snack food brand owned by United Biscuits. The name derives from the original Scottish biscuit maker, McVitie and Price, Ltd., established in 1830 on Rose Street in Edinburgh, Scotland. The company moved to various sites in the city before completing the St. Andrews Biscuit Works factory on Robertson Avenue in the Gorgie district in 1888. The company also established one in Glasgow and two large manufacturing plants south of the border, in Heaton Chapel, Stockport, and Harlesden, London. McVitie and Price's first major biscuit was the McVitie's Digestive, created in 1892 by a new young employee at the company named Alexander Grant, who later became the managing director of the company. The biscuit was given its name because it was thought that its high baking soda content served as an aid to food digestion. The McVitie's Chocolate Homewheat Digestive was created in 1925. Although not their core operation, McVitie's were commissioned in 1893 to create a wedding cake for the royal wedding between the Duke of York and Princess Mary, who subsequently became King George V and Queen Mary. This cake was over two metres high and cost one hundred and forty guineas. It was viewed by 14,000 and was a wonderful publicity for the company. They received many commissions for royal wedding cakes and christening cakes, including the wedding cake for Queen Elizabeth II and Prince Phillip and Prince William and Catherine Middleton. Under United Biscuits McVitie's holds a Royal Warrant from Queen Elizabeth II.

Huntley & Palmers is a British firm of biscuit makers originally based in Reading, Berkshire. The company created one of the world's first global brands and ran what was once the world's largest biscuit factory. Over the years, the company was also known as J. Huntley & Son and Huntley & Palmer. Huntley and Palmer were renown for their ‘superior reading biscuits’ which they promoted in different varieties for different occasions, including at breakfast time. Biscuit varieties had similar patterned tins in different colour ranges to aid those who were unable to, or couldn’t, read!