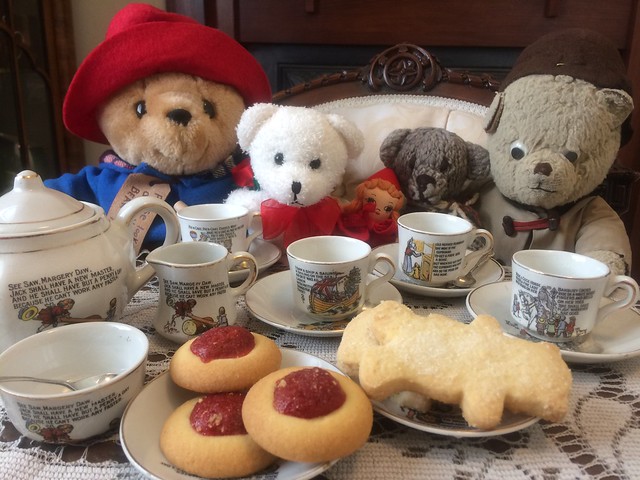 SCOUT: “I will, Cousin Paddington.” *Deposits tea cups on the tea table.*

PADDY: “Thank you, Scout. You are so helpful.”

SCOUT: “Thank you, Paddy. Where is Daddy?”

PADDY: “He just took a big parcel from Mr. Postman into the kitchen. It had lots of pretty stamps on it.”

DADDY: *Tears at tape around box in the kitchen.* “Oh!”

LITTLE AMERICAN VOICE: *From the kitchen.* “How do you do? Do Paddy and Scout live here?”

DADDY: “Why, yes they do! Are they expecting you?”

LITTLE AMERICAN VOICE: “Possibly not, but I’ve travelled a long way to meet them.”

DADDY: “Paddy! Scout! You have a visitor from the other side of the world come to visit.”

SCOUT: “A visitor!” *Jumps up and down.* “How exciting. Who is visiting please?”

BOGART: *Spoken with American accent.* “How do you do? My name is Bogart. Are you Paddy and Scout?”

PADDY: “And this is Cousin Paddington!”

COUSIN PADDINGTON: “How do you do, Bogart?” *Doffs hat.*

BOGART: “How do you do? I’ve come all the way from Georgia, via Alabama. I asked my Mamma Kim to organise for me to visit you. As the nasty bug has grounded planes, I had to come via the post.”

SCOUT: “Goodness! Were you frightened? Wasn’t it dark in the box? Did you have enough to eat?”

BOGART: “Thank you for your concern, Scout. I was a little nervous, but I so wanted to meet you all! It was dark in the box, but that made it easier to sleep en route. Mamma made sure she packed enough food for me, but I must confess, I finished the last of my provisions yesterday.”

COUSIN PADDINGTON: “Goodness! You must have a grumbly tummy then, Bogart!”

BOGART: “I hadn’t noticed so much until you asked, but now you mention it Cousin Paddington, I do have quite a grumbly tummy.” *Rubs tummy vigorously.*

PADDY: “Well isn’t that opportune! We were just about to sit down to have some elevenses. Would you care to join us?”

BOGART: “Why thank you Paddy. That would be delightful!”

SCOUT: “I will go fetch you a cup, so you can have some tea. I will bring you the cup that features a ship on it since you have travelled so far. I’m afraid we don’t have any with aeroplanes on them, or postmen.”

SCOUT: *Brings back a teacup and saucer featuring ‘I Saw a Ship a Sailing’ nursery rhyme.*

DADDY: “Thank you Scout. Now here are some home made shortbreads and some jam fancies and a pot of tea.”

SCOUT: “I think you are going to fit in here very well, Bogart.”

BOGART: “Thank you, Scout! You have all made me feel very welcome.”

DADDY: “Now everyone. Please let me take a photo of you, so I can share it with your Mamma back in Alabama.” *Takes out camera.* “Say, ‘grumbly tummies’!”

This beautiful nursery tea set is made by the Shell China company in the 1910s. It features six cups, saucers (not all the set is being used today) as well as a teapot, milk jug and sugar bowl, all gilt and featuring different nursery rhymes including: "See Saw Margery Daw", "Jack and Jill", "This Little Pig Went to Market", "Taffy ws a Welshman", "Ride a Cock Horse to Banbury Cross", "Little Jack Horner", “Pat-A-Cake, Pat-A-Cake”, "Old Mother Goose", "Little Miss Muffett" and "I Saw a Ship a Sailing" amongst others. It is the prequel set to the Shell China nursery and faerie tale tea sets I have from the 1920s and 1930s. The designs are very Edwardian and the set is made up of smaller pieces. There are also doll (bear) sized tea spoons which are sterling silver salt spoons, and the spoon in the “See Saw Margery Daw” sugar bowl is an Eighteenth Century sterling silver mustard spoon.

Cousin Paddington is a recent visitor to our family. Travelling all the way from London, he was caught in transit thanks to the Coronavirus pandemic, so it looks like he is stopping with us for a while. The more I look into his happy, smiling face, the more attached I am becoming to him.