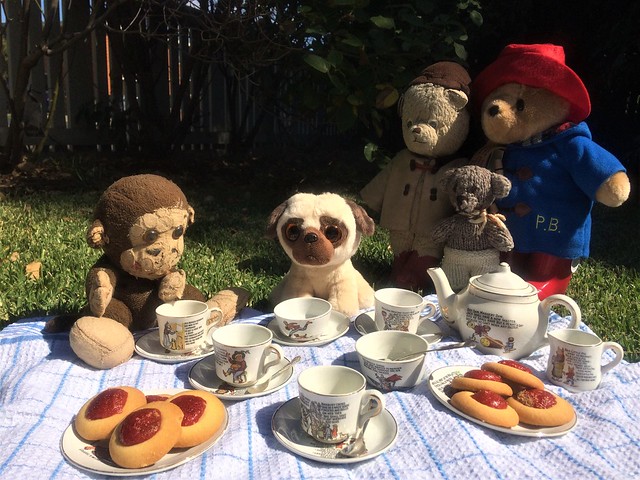 Paddington, Scout and the Teddy Bears’ Picnic
PADDY: “I don’t understand why Daddy insisted that all three of us take Cabbage for a walk today.”

COUSIN PADDINGTON: “I don’t either, Paddy.”

SCOUT: “Well, it’s a beautiful spring day for it at least.”

CABBAGE: “Woof! Woof!” *Runs off across the lawn.*

SCOUT: “But look Paddy and Cousin Paddington, he has stopped at something on our lawn!”

PADDY: “Goodness Scout! What is it?”

SCOUT: “I don’t know, but it looks like a picnic!”

PADDY, COUSIN PADDINGTON and SCOUT hurry over to where Cabbage has stopped.

PADDY: “Hullo Chippy! What are you doing out here?”

DADDY: *Appears from behind a rosebush.* “Surprise Paddy, Scout and Cousin Paddington!”

CHIPPY: “Daddy thought the weather was so nice that it was time for a teddy bears’ picnic on the lawn and he wanted to surprise you! He thought I might enjoy it too!”

PADDY, COUSIN PADDINGTON and SCOUT jump up and down with excitement and delight.

PADDY: “Oh thank you Daddy! You certainly surprised us!”

COUSIN PADDINGTON: “Yes you did Daddy! Thank you!”

PADDY, COUSIN PADDINGTON, SCOUT and CHIPPY: “We love you Daddy!”

DADDY: “And I love you all too! Now come sit, eat some jam fancies and I’ll pour some tea.”

The theme for “Smile on Saturday” on October 24th is “song title” where the image must portray the title of a song. Therefore, I chose one of my favourite childhood and adulthood songs: “The Teddy Bears’ Picnic”, which is a famous song consisting of a melody by American composer John Walter Bratton, written in 1907 with lyrics added by Irish song writer Jimmy Kennedy in 1932. It is still popular to this day and has been recorded by many artists over the last century including Henry Hall and the BBC Orchestra, Ethel Smith, Bing Crosby, Rosemary Clooney, Jerry Garcia, John Inman, Anne Murray and my favourite version performed by a band called the Palm Court Orchestra who specialise in playing Edwardian light music in a palm court orchestra style.

Every teddy bear who's been good is sure of a treat today!
There's lots of marvellous things to eat and wonderful games to play,
Beneath the trees where nobody sees they'll hide and seek as long as they please:

That's the way the teddy bears have their picnic.

Picnic time for teddy bears!
The little teddy bears are having a lovely time today.
Watch them, catch them unawares and see them picnic on their holiday.

See them gaily gad about:
They love to play and shout,
They never have any cares!
At six o'clock their mummies and daddies will take them back home to bed,
Because they're tired little teddy bears!

This beautiful nursery tea set is made by the Shell China company in the 1910s. It features six cups, saucers (not all the set is being used today) as well as a teapot, milk jug and sugar bowl, all gilt and featuring different nursery rhymes including: "See Saw Margery Daw", "Jack and Jill", "This Little Pig Went to Market", "Taffy ws a Welshman", "Ride a Cock Horse to Banbury Cross", "Little Jack Horner", “Pat-A-Cake, Pat-A-Cake”, "Old Mother Goose" and "I Saw a Ship a Sailing" amongst others. It is the prequel set to the Shell China nursery and faerie tale tea sets I have from the 1920s and 1930s. The designs are very Edwardian and the set is made up of smaller pieces. There are also doll (bear) sized tea spoons which are sterling silver salt spoons, and the spoon in the “Old Mother Goose” sugar bowl is an Eighteenth Century sterling silver mustard spoon.

Cousin Paddington is a recent visitor to our family. Travelling all the way from London, he was caught in transit thanks to the Coronavirus pandemic, so it looks like he is stopping with us for a while. The more I look into his happy, smiling face, the more attached I am becoming to him.

Chippy the monkey came to live with me when I was four. His name is derived from his innards, which are broken chips of hazelnut shells. He was made in America some time in the mid Twentieth Century. He features beautiful brown glass eyes, a felt face, hands and feet. He was given to me by one of my Grandfather's friends who worked in a small high street toy shop which sold a mixture of new, vintage and antique toys. Chippy was vintage at the time, and had been well loved prior, so with a few holes, some worn plush and patches, he was too worn to be sold, but my family friend knew that my gentle nature and respect for my toys meant he could find a new home with me for a long time. All these decades later, she was proven right, for he still lives with me; a bit more loved, a bit more worn and with a few more patches. He also has some red chalk marks on his right hand which I remember putting on him by accident when I was six! He wanted to draw a rose on my chalkboard and I helped him do it!

preview: Paddington, Scout and the Teddy Bears’ Picnic on Flickriver