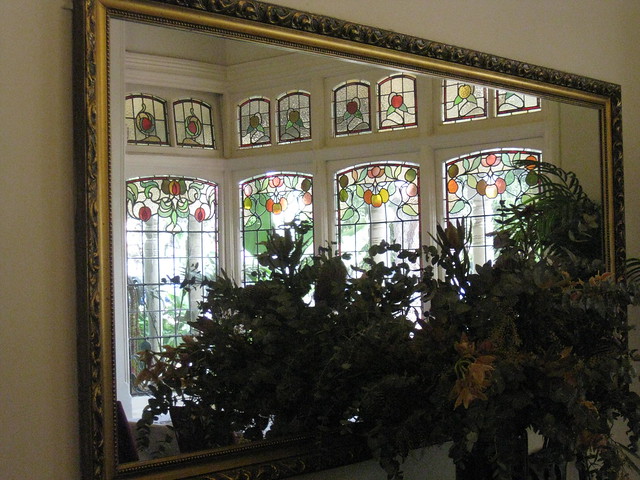 Reflected Beauty: the Art Nouveau Stained Glass Bay Window of the Dining Room of "The Gables" Queen Anne Villa - Finch Street, East Malvern
The "The Gables" has a beautiful dining room with a spacious bay window and a smaller lancet window featuring Art Nouveau stained glass, and an elegant tiled fireplace. It was the first room used for a wedding breakfast when "The Gables" became a venue for hire. The stained glass in both the bay window and the side lancet window feature stylised Art Nouveau fruit hanging from elegantly draped branches and vines, and flowers. Some of the fruit look like oranges, some apples, others plums and some pomegranates. The flowers look very much like lilies, as found elsewhere in the house.

"The Gables" is a substantial villa that sits proudly on leafy Finch Street in the exclusive inner city suburb of East Malvern.

Built in 1902 for local property developer Lawrence Alfred Birchnell and his wife Annie, "The Gables" is considered to be one of the most prominent houses in the Gascoigne Estate. The house was designed by Melbourne architect firm Ussher and Kemp in what was the prevailing style of the time, Queen Anne, which is also known as Federation style (named so after Australian Federation in 1901). Ussher and Kemp were renowned for their beautiful and complex Queen Anne houses and they designed at least six other houses in Finch Street alone. "The Gables" remained a private residence for many years. When Lawrence Birchnell sold it, the house was converted into a rooming house. It remained so throughout the tumultuous 1920s until 1930 when it was sold again. The new owners converted "The Gables" into a reception hall for hire for private functions. The first wedding reception was a breakfast held in the formal dining room in 1930, followed by dancing to Melbourne’s first jukebox in the upstairs rooms. Notorious Melbourne gangster Joseph Theodore Leslie "Squizzy" Taylor was reputed to have thrown a twenty-first birthday party for his girlfriend of the day in the main ballroom (what had originally been the house's billiards room). "The Gables" became very famous for its grand birthday parties throughout the 1930s and 1940s. With its easy proximity to the Caulfield Race Course, "The Gables" ran an underground speakeasy and gambling room upstairs and sold beer from the back door during Melbourne’s restrictive era of alcohol not sold after six o'clock at night. Throughout its history, "The Gables" has been a Melbourne icon, celebrating generation after generation of Melbourne’s wedding receptions, parties and balls. Lovingly restored, the atmosphere and charm of "The Gables" have been retained for the future generations.

Grand in its proportions, "The Gables" is a sprawling villa that is built of red brick, but its main feature, as the name suggests, is its many ornamented gables. The front façade is dominated by six different sized gables, each supported by ornamental Art Nouveau influenced timber brackets. The front and side of the house is skirted by a wide verandah decorated with wooden balustrades and rounded fretwork. "The Gables" features two grand bay windows and three other large sets of windows along the front facade, all of which feature beautiful and delicate Art Nouveau stained glass of stylised flowers or fruit. Impressive Art Nouveau stained glass windows can also be found around the entrance, which features the quote made quite popular at the time by Australian soprano Nellie Melba "east, west, home's best." Art Nouveau stained glass can be found in all of the principal rooms of the house; both upstairs and down. “The Gables” also features distinctive chimneys and the classic Queen Anne high pitched gable roofs with decorative barge-boards, terra-cotta tiles and ornate capping.

As a result of Federation in 1901, it was not unusual to find Australian flora and fauna celebrated in architecture. This is true of "The Gables", which features intricate plaster work and leadlight throughout the mansion showing off Australian gum leaves and flowers. "The Gables" has fifteen beautifully renovated rooms, many of which are traditionally decorated, including beautiful chandeliers, ornate restored wood and tile fireplaces, leadlight windows, parquetry flooring, sixteen foot ceilings and a sweeping staircase. The drawing room still also features the original leadlight conservatory "The Gables" boasted when it was first built.

"The Gables", set on an acre of land, still retains many of the original trees, including the original hedge and two enormous cypress trees in the front. The garden was designed by William Guilfoyle, the master landscape architect of the Royal Botanical Gardens, and "The Gables" still retains much of it original structure. It features a rose-covered gazebo, a pond and fountain, as well as the tallest Norfolk Island pine in the area, which can be seen from some of the tallest skyscrapers in the Melbourne CBD.

Henry Hardie Kemp was born in Lancashire in 1859 and designed many other fine homes around Melbourne, particularly in Kew, including his own home “Held Lawn” (1913). He also designed the APA Building in Elizabeth Street in 1889 (demolished in 1980) and the Melbourne Assembly Hall on Collins Street between 1914 and 1915. He died in Melbourne in 1946.

Beverley Ussher was born in Melbourne in 1868 and designed homes and commercial buildings around Melbourne, as well as homes in the country. He designed "Milliara" (John Whiting house) in Toorak, in 1895 (since demolished) and "Blackwood Homestead" in Western Australia. He died in 1908.

Beverley Ussher and Henry Kemp formed a partnership in 1899, which lasted until Beverley's death in 1908. Their last building design together was the Professional Chambers building in Collins Street in 1908. Both men had strong Arts and Crafts commitments, and both had been in partnerships before forming their own. The practice specialised in domestic work and their houses epitomize the Marseilles-tiled Queen Anne Federation style houses characteristic of Melbourne, and considered now to be a truly distinctive Australian genre. Their designs use red bricks, terracotta tiles and casement windows, avoid applied ornamentation and develop substantial timber details. The picturesque character of the houses results from a conscious attempt to express externally with gables, dormers, bays, roof axes, and chimneys, the functional variety of rooms within. The iconic Federation houses by Beverley Ussher and Henry Kemp did not appear until 1892-4. Then, several of those appeared in Malvern, Canterbury and Kew.

Queen Anne style was mostly a residential style inspired by the Arts and Crafts movement in England, but also encompassed some of the more stylised elements of Art Nouveau, which gave it an more decorative look. Queen Anne style was most popular around the time of Federation. With complex roofline structures and undulating facades, many Queen Anne houses fell out of fashion at the beginning of the modern era, and were demolished.