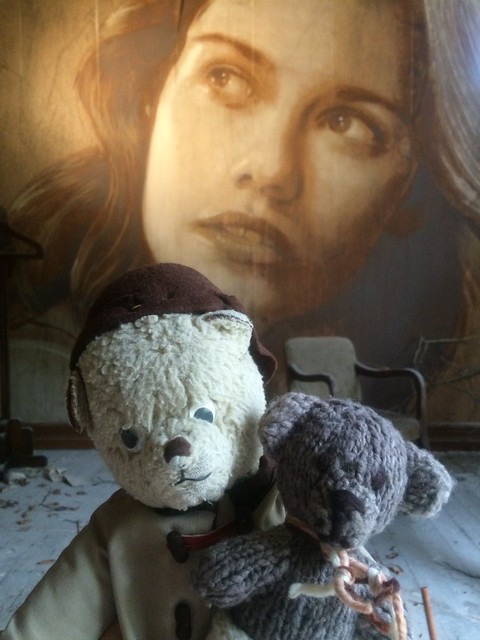 Paddington Visits the Rone - Empire Exhibition
"Hullo everyone! Goodness, this Rone - Empire installation exhibition an Burnham Beeches that Daddy took Scout and I to is quite amazing! I didn't know where to look, and nor did Scout. There are so many interesting things to look at, listen to and to smell. The painting behind us is just one example of the amazing visuals throughout the house. It's a portrait of an actress that Daddy and I saw on DVD in the remake of Picnic at Hanging Rock over Christmas. She is very pretty, don't you think? We weren't even supposed to go there. We were going to the Ka-Bloom flower festival in Silvan, but we stopped so Daddy could photograph the outside of Burnham Beeches (again)! Daddy asked if he could buy tickets to the exhibition, and because Scout and I are only little bears, we were allowed in for free! Isn't that nice?

By the way, just between you and me, I think they might need to review who does the cleaning at Burnham Beeches these days. Daddy and I came here in 1982, and it was much cleaner then! The tables on this visit were covered in dirty dishes, tarnished silver, dusty glasses and there were even cobwebs about! The service was better back then too."

"Empire" combined a mixture of many different elements including art, sound, light, scent, found objects, botanic designs, objects from nature and music especially composed for the project by Nick Batterham. The Burnham Beeches project re-imagines and re-interprets the spirit of one of Victoria’s landmark mansions, seldom seen by the public and not accessed since the mid 1980s. According to Rone - Empire website; "viewers are invited to consider what remains - the unseen cultural, social, artistic and spiritual heritage which produces intangible meaning."

Rone was invited by the current owner of Burnham Beeches, restaurateur Shannon Bennett, to exhibit "Empire" during a six week interim period before renovations commence to convert the heritage listed mansion into a select six star hotel.

Rone initially imagined the mansion to be in a state of dereliction, but found instead that it was a stripped back blank canvas for him to create his own version of how he thought it should look. Therefore, almost all the decay is in fact of Rone's creation from grasses in the Games Room which 'grow' next to a rotting billiards table, to the damp patches, water staining and smoke damage on the ceilings. Nests of leaves fill some spaces, whilst tree branches and in one case an entire avenue of boughs sprout from walls and ceilings. Especially designed Art Deco wallpaper created in Rone's studio has been installed on the walls before being distressed and damaged. The rooms have been adorned with furnishings and objects that might once have graced the twelve original rooms of Burnham Beeches: bulbulous club sofas, half round Art Deco tables, tarnished silverware and their canteen, mirrored smoke stands of chrome and Bakelite, glass lamps, English dinner services, a glass drinks trolley, photos of people long forgotten in time, walnut veneer dressing tables reflecting the installation sometimes in triplicate, old wire beadsteads, luggage, shelves of books, an Underwood typewriter, a John Broadwood and Sons of London grand piano and even a Kriesler radiogramme. All these objects were then covered in a thick sheet or light sprinkling of 'dust' made of many different things including coffee grinds and talcum powder, creating a sensation for the senses. Burnham Beeches resonated with a ghostly sense of its former grandeur, with a whiff of bittersweet romance.

Throughout the twelve rooms, magnificent and beautifully haunting floor-to-ceiling and wall-to-wall portraits of Australian actress Lily Sullivan, star of the Foxtel re-make of Picnic at Hanging Rock, appear. Larger than life, each portrait is created in different colours, helping to create seasonal shifts as you move from room to room.

Although all the rooms are amazing for many different reasons, there are two major standouts. The Study features walls of books covered with a portrait of Lily Sullivan, and the entire room is partially submerged in a lake of black water with the occasional red oak leaf floating across its glassy surface. The Dining Room features two long tables covered in a Miss Havisham like feast of a trove of dinner table objects from silverware and glassware to empty oyster shells and vases of grasses and feathers.

The Dining Room installation I found especially confronting. In 1982, I visited Burnham Beeches when it was a smart and select hotel and had Devonshire tea in the dining room at a table alongside the full length windows overlooking the terraces below. I was shocked to see a room I remember appointed with thick carpets and tables covered in gleaming silver and white napery, strewn with dust and leaves, and adorned with Miss Havisham's feast of found dining objects.

I feel very honoured and privileged to be amongst the far too few people fortunate enough to have seen Rone's "Empire", as like the seasons, it is ephemeral, and it will already have been dismantled. Rone's idea is that, like his street art, things he creates don't last forever, and that made the project exciting. I hope that my photographs do justice to, and adequately share as much as is possible of this amazing installation with you.

My Paddington Bear came to live with me in London when I was two years old (many, many years ago). He was hand made by my Great Aunt and he has a chocolate coloured felt hat, the brim of which had to be pinned up by a safety pin to stop it getting in his eyes. The collar of his Macintosh is made of the same felt. He wears wellington boots made from the same red leather used to make the toggles on his Macintosh.

Scout is a recent addition to our little family. He was a gift to Paddy from my friend. He is a Fair Trade Bear hand knitted in Africa. His name comes from the shop my friend found him in: Scout House. He tells me that life was very different where he came from, and Paddy is helping introduce him to many new experiences. Scout catches on quickly, and has proven to be a cheeky, but very lovable member of our closely knit family.