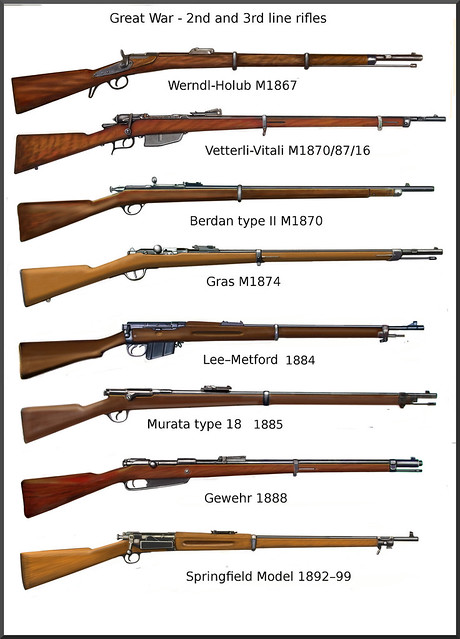 
The First World War was a voracious monster devouring men, animals and materials.

To counter the demand for weapons they were often used prey of war rifles such as the captured
Russian Mosin Nagant used by Germany to arm some navy and home guard divisions,
but most of all were used large quantities of old rifles, and
often the operating life of these old glories continued after the Great War,
until 1930 they continued to arm many colonial armies of European nations,
taken by a megalomania I quote myself ;)
andreasilva60.deviantart.com/a…

Most of these weapons were single-shot and were feeded by black powder cartridges that had a caliber
of more than 10 mm, but were much less powerful than the modern smokeless powder little ammo.

Some of these weapons were modified to accept the modern ammo of new ordnance rifles,
such as the Italian Vetterli-Vitali which was also equipped with the Mannlicher-Carcano charger package,
or the Japanese Murata type 20, to whom was added a tubolar charger too.
This operation was very dangerous because the bolts, which were not
designed for the high pressures of modern cartridges, at best lost gas, at worst burst.

It is necessary to say that these weapons generally armed the home guard, or were used to train the
new recruited men,
thus they were not usually issued to the front line army and actually fired a few shots in the war.


Some of these rifles are really old-fashioned, and even not cosidering their mechanisms,
this results clear just from their shape, such as the Berdan or even more the Werndl,
others as the Lee-Metford seem modern while they were actually
a wrecks of the past, because they were designed to shoot black powder cartridges, indeed
the British soldiers under the fire of the Boers' M1895 Mauser regretted bitterly the adoption of
this weapon.

The Grass Rifle was the Chassepot heir,
even a rich army like the French one chosed to adopt a rifle that was a modification of the old
Chassepot, allowing the old weapon stock in the depots to be refurbished.

The Gewehr 88, often mistakenly called Mauser 1888 or M88 , while deriving from a state project,
was a modern weapon that initially suffered from design mistakes and worst cartridges,
it must be understood that at the end of 1800 the study of smokeless ammonitions
was at a pioneering stage, while Springfield was the American model of a Danish military rifle.
Strangely, the US adopted this weapon already obsolete towards the end of 1800, and indeed its
duration in service was very short, as soon as possible, after the War of the Philippine,
it was replaced by the model 1903, in this case too a Mauser -the M93 managed by the Spanish army-
was very envyed by those who underwent his shot. During ww1 all the ordnance rifles of all
nations involved in war were more or less as good as the Mauser, the technological gap had
been already filled.
© All Rights Reserved
Tags: more » « less
Groups appears in:   • The Great War 1914 - 1918
Stats: 4,073 views 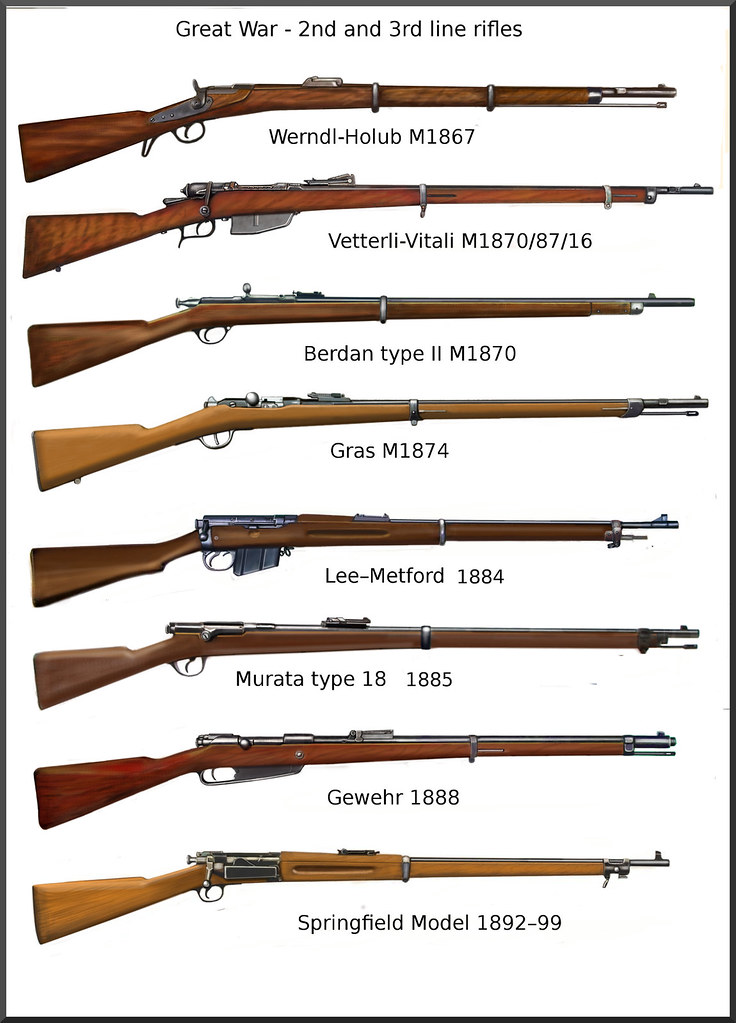