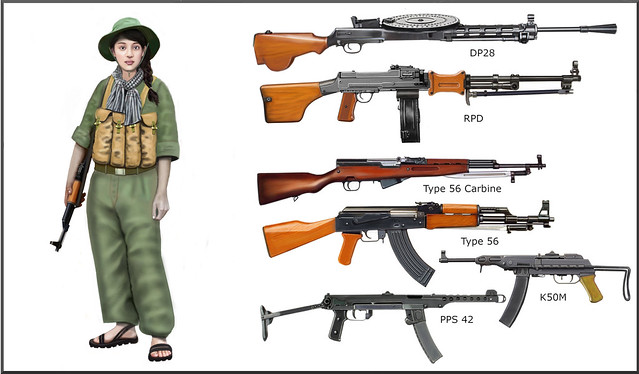 Vietcong fighter
The Vietcong fighter wears Dep lop sandals, made from recycled tyres, they were called “Ho Chi Minh sandals” by American, the checkered shawl is called Khan ran, while the pijama uniform is called ao ba ba, the chest rig is the chinese Chi-Com suited for type 56 magazines, the headgear is a tipical vietcong boonie hat.

These weapons, which for the most part are produced in China under Soviet license, also armed the Army of the Democratic Republic of Vietnam, and they do not exhaust the argument about the weapons used by the Vietcong. In fact they used a multitude of different weapons, such as French weapons captured during the Indochina War, like the MAS 38 SMG and the rifles MAS 36 and MAS 49, then dismissed weapons of the Soviet Union Army like the Mosin Nagant rifle or the Tokarev TT33 pistol, then lot of artigianal weapons, and many German MP40 booty of war of the Red Army too. Also North Korea provided many weapons to the Vietcong, such as the North Korean version of the Makarov pistol or a local version of the SKS.


The DP 28 Pulemyot Degtyaryova Pekhotny, designed by Degtyaryov, the same engineer who designed the PPD sub-machine gun, was adopted by the Russian army in 1928, it was gas operating light machine gun, simple, cheap to build and very resistant to dirt. It was 1270 mm long, weighed 9.1 kg and was chambered in 7.62x54 R. The ammonition was stored in a 47-round circular rotating magazine attached to the top of the receiver. It has a rate of fire of 550 rpm. Its problem consisted in the time consuming operation of reloading the magazines. It was the main weapon of the Russian infantry's squads. About 800,000 copies were produced.

The RPD Ruchnoy Pulemyot Degtyaryova was designed in 1944 and distributed in small quantities at the end of the Second World War, after the war it became the LMG weapon of the infantry squad of the Red Army until 1960, when it was replaced by RPK Ruchnoy Pulemyot Kalashnikova .

The K50M was a North Vietnamese conversion of the Chinese type 50 submachine gun provided by China. This in turn was a Chinese version of the Soviet PPSh 41. The wooden stock was replaced by a sliding wire butt, and the barrel and its jacket were shortened, while the internal mechanics was kept that way. It was long 66 cm, 76 cm with the barrel extendend, , its weight was of 3,4 kg, the calibre was the 7.63x25, the same of the pistol Tokarev TT33. The sight was similar to that of the AK47.

The type 56 is the Chinese version of the soviet AK47. Its weight is 3.8 kg, its lenght is 874 mm, it uses the russian intermediate ammo 7.62x39mm. The list of the wars where it was used is astonishing, from the Vietnam War, through the Iran-Irak war since the Darfur, Libyan Civil war and South Sudanese war, it has fought quite 30 amongst wars, revolutions or insurrections.


The type 56 carbine was the Chinese version of the Russian SKS, the semi-automatic carbine designed by Simonov at the end of the second world war, that wasn’t used in that war, or that was used in a very little stock by Spetsnaz reparts. It’s weight was of 3.85 kg, its lenght is 1020 mm, it uses the russian intermediate ammo 7.62x39mm. Chine produced more than 10 millions of type 56 carbines.

The PPS 42 Pistolet-Pulemyot Sudayeva, designed by a Russian officer was put into production by engineer Sudarev, it was a weapon with good characteristics that could be produced in 2.7 hours compared to 7.3 hours needed to produce a PPSh 41 and at 13.7 hours necessary to produce a PPD 40 miter, furthermore it required the use of less ferrous material. Production began in 1942 during the siege of Leningrad, and were widely used in the defense of the city. The weapon used only a curved 35 round box which was not used with the PPSh. 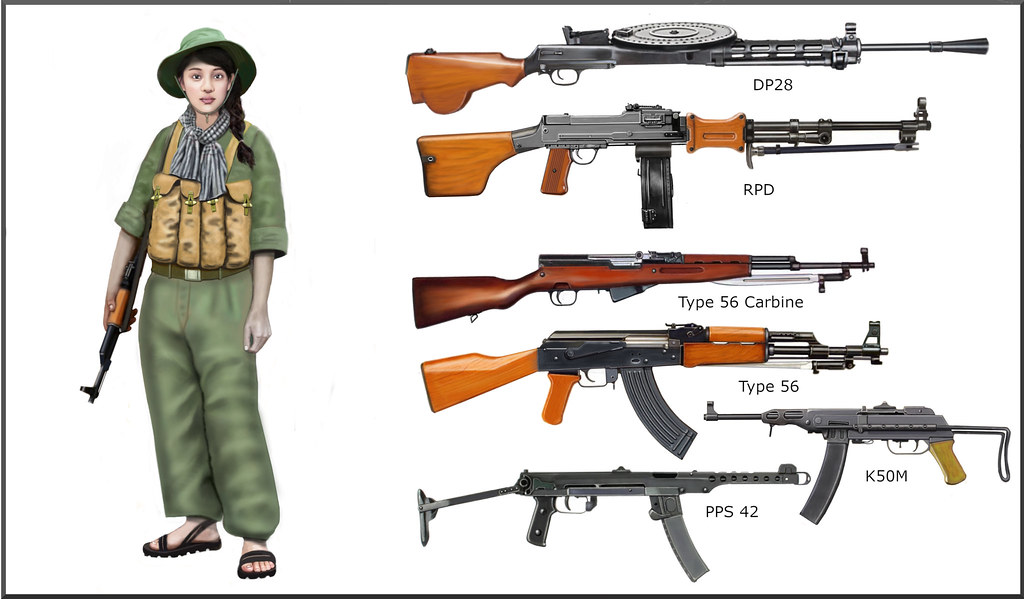