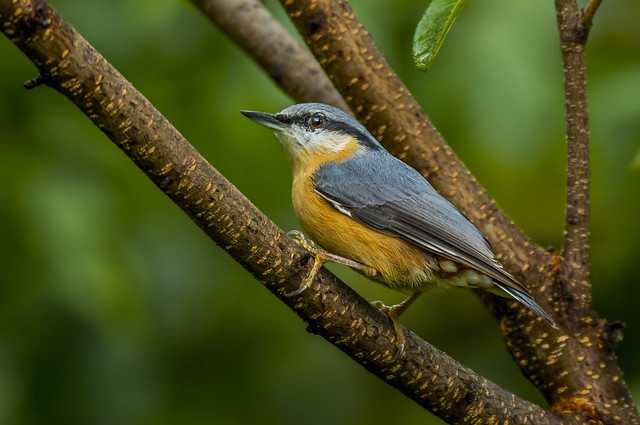 Nuthatch
The Eurasian nuthatch or wood nuthatch (Sitta europaea) is a small passerine bird found throughout temperate Asia and in Europe, where its name is the nuthatch. Like other nuthatches, it is a short-tailed bird with a long bill, blue-grey upperparts and a black eye-stripe. It is a vocal bird with a repeated loud dwip call. There are more than 20 subspecies in three main groups; birds in the west of the range have orange-buff underparts and a white throat, those in Russia have whitish underparts, and those in the Far East have a similar appearance to European birds, but lack the white throat.
The preferred habitat is mature deciduous or mixed woodland with large, old trees, preferably oak. Pairs hold permanent territories, and nest in tree holes, usually old woodpecker nests, but sometimes natural cavities. If the entrance to the hole is too large, the female plasters it with mud to reduce its size, and often coats the inside of the cavity too. The 6–9 red-speckled white eggs are laid on a deep base of pine or other wood chips.
The Eurasian nuthatch eats mainly insects, particularly caterpillars and beetles, although in autumn and winter its diet is supplemented with nuts and seeds. The young are fed mainly on insects, with some seeds, food items mainly being found on tree trunks and large branches. The nuthatch can forage when descending trees head first, as well as when climbing. It readily visits bird tables, eating fatty man-made food items as well as seeds. It is an inveterate hoarder, storing food year-round. Its main natural predator is the Eurasian sparrowhawk.
Fragmentation of woodland can lead to local losses of breeding birds, but the species' range is still expanding. It has a large population and huge breeding area, and is therefore classified by the International Union for Conservation of Nature (IUCN) as being of least concern.