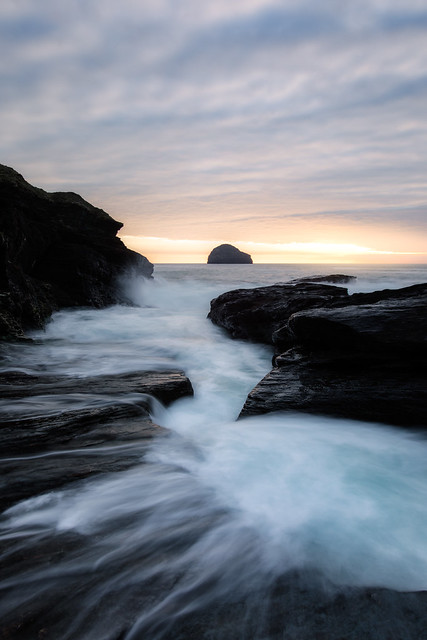 The Search for Sea Badger Droppings
What I really wanted to do was spend the day at home, catching up with normal life, pottering around the garden and planning what to plant where for the summer, and returning to the huge backlog of images from the trips to Madeira and the New Forest. After coming home from the latter a few days earlier I’d packed the van again the very next day to meet up with Mark and Wendy, our old hiking buddies who were touring Cornwall in their motorhome. By the time I returned home on Sunday afternoon I slumped onto the sofa and slept until tea time, woken by a text from my son in Wadebridge, who wanted to add another escapade to our friends’ visit the following day. My first reaction was to decline. I had plans for almost every day of the forthcoming week, and I really wanted a breather from life for twenty-four hours. But then it occurred to me that Tom’s time is far more precious than mine; he’d be back at work the following morning, and even though it was a bank holiday which means I usually hide in the garden, I said I’d be at his around noon, from where we’d push on to a couple of places that until now had always just been interesting looking dots on the map.

To start with, we headed for Port Isaac, home of TV’s Mr Grumpy, Doc Martin, a number of pasty hungry herring gulls and more than a smattering of bank holiday visitors. Only Wendy’s pasty came under attack, and fortunately for Tom and myself, it was of the vegetarian variety, so we didn’t feel obliged to share our steak filled options in recompense for failing to warn our friends about the likelihood of needing to repel airborne assaults. Following this, we spent the entire car parking allowance hunting for sea glass on the beach. Of course we did. What else would you do in a picture perfect postcard village riddled with pubs and ice cream parlours? “We’re looking for Sea Badger Droppings!” affects my son in a strangely Bristolian sounding accent whenever asked by strangers what they’re missing. The odd thing is he was born in Truro, so quite why he suddenly decides to sound like he’s the new tambourine player in The Wurzels for these moments is a question that remains unresolved. The fact that he believes for a moment even the most gullible tourist might fall for the ruse also requires further explanation. Surely everyone knows the Sea Badgers only ever leave the Isles of Scilly and come to the mainland for the mating season in the autumn?

And then we moved on to the bit I’d been looking forward to. Tom’s partner Rhi grew up in Tintagel, and had arranged to meet us later at Trebarwith Strand, her local childhood haunt after finishing her shift as a paramedic. We ate at the pub which sits above the water overlooking the sea, where I was so wrapped up in the prospect of the sunset shoot that I raced through my Waldorf Salad almost without reference to Fawlty Towers at all. I also failed to notice the presence of the famous face sitting at the opposite table; one who appeared in the locally filmed TV series mentioned above if you were wondering. Of course, I’d already done my homework, which mostly consisted of examining the weather and tide apps that tell me whether I should get excited, and then viewing a certain Mr Pedlar’s (you know him!) photos in these pages to see what to expect. And in a rare moment of perfect fusion, it seemed the gods were on my side. The high tide I'd anxiously coveted for this location would be just an hour before sunset and in the previously featureless sky, groups of fluffy clouds were gathering like old friends to hang in stillness over Gull Rock. My plate now clear of all the remaining Waldorfs, I raced down to the water’s edge like a child excused from the dinner table, only to find the plum spot taken by an interloper. I knew I should have brought a sandwich and refused to budge for two hours – naturally if I’d been here on a photography only mission rather than a social engagement that’s exactly what I would have done. Soon he was followed by three or four more tripod bearing togs, each competing for ground in a very limited space, and to add insult to injury not one of them appeared to be Mr Pedlar himself. It goes without saying that if Lee had been present they’d have seen him sharpening his famous elbows and all headed for the pub in varying states of fear for their personal safety to soak up restorative brandies in an instant, leaving me with only himself to contend with.

But high tide Trebarwith offers a secret weapon to the intrepid tripod wielder, in the form of a narrow ledge of rock to the left of the funnel where we were all standing. With a degree of care and the removal of the varifocals that suddenly become about as useful as a house made of cheese when looking at the space around my feet, I hopped across the stream that cuts through the rock shelf on its way to the sea. Finally I had the space I wanted, from where I could watch the rest of them fight for position on the other side of the divide. One of them decided to offer some counsel. “Take care down there. I once watched someone slip over on that bit, and when they carried him back to safety his kneecap wasn’t in the same place it had been when he first went down there.” I nodded and smiled. I’d already negotiated a section that the falling tide had uncovered and was all too aware of exactly how slippery the green and black areas that I’d so studiously avoided were. Two hours earlier, on the other side of high tide it had been bone dry here and the difference on the surface beneath my feet was all too palpable. I moved very slowly, just a few yards forward; every inch was undertaken with the utmost caution in my most grippy of hiking shoes, using the tripod as a makeshift walking stick until I reached a small crack in the rock above the receding sea that offered a bit of traction. Now I could concentrate on setting up the shot, waiting for those moments when an incoming wave washed back towards the sea, the brightness of the white water softening to an icy blue after the break. Above us, the dreamy shroud began to light from underneath as the sun, cloaked in a glorious bold and bright orange made its final bow. As long as I stayed on my feet, I might just get a shot. At least if I got it right, I wouldn’t have to take my chances here again on another visit. Probably.

I’ve often thought that pride is an unattractive trait, and blowing one’s own trumpet should be put to one side in favour of reluctant acceptance of a positive reaction from one’s peers where merited. But in this case, I have to admit I was rather excited about sharing the image, and the entire brass section, accompanied by an oboe, a couple of flutes and three very noisy recorders has been turned to full volume on presenting the final result. I like this shot rather a lot. In fact I'd go as far as to say it's one of my favourites. So much in fact that I’m going to get it printed and put it on the wall at home. Of course it’s pure luck really. It's not often that you turn up at a brand new location to conditions you never dared to hope for. Not often you get to take a shot that makes you this happy when you’re in the company of people who didn’t come here armed with tripods and bags full of camera gear.

The farewell was not long after I took this shot. Mark and Wendy were heading back to the campsite near Tintagel as their adventures in the beautiful county that we call home came towards a close. Tom and Rhi headed back to their home in Wadebridge and work the next day. For a while I sat at the wheel of my car and grinned into the fading light. Somewhere out on the water, a skulking pair of Sea Badgers grinned back as they slipped beneath the surface and began the long journey back to the Scillies.

preview: The Search for Sea Badger Droppings on Flickriver