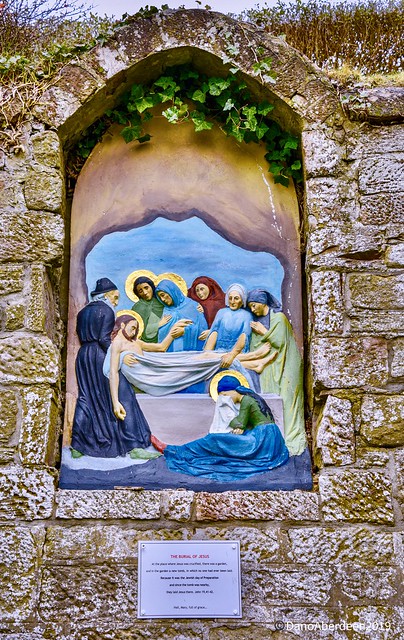 I thoroughly enjoyed my visit, it really was excellent , capturing my visit and archiving here on my Flickr .

Carfin Lourdes Grotto, a Roman Catholic shrine in Scotland dedicated to Our Lady of Lourdes, was created in the early twentieth century.

The "Carfin Grotto", as the shrine is locally referred to, was the brainchild of Father, later Canon, Thomas N. Taylor (died 1963), parish priest of St. Francis Xavier's Parish in the small, mining village of Carfin, which lies two miles east of Motherwell, in the West of Scotland. Following a trip to France's principal Marian shrine at Lourdes, Canon Taylor's vision was to build a religious memorial in honour of Our Blessed Lady based on the template of the Grotto of Massabielle.

Realizing this vision was to become his life's work. Since its opening in the early 1920s, the "grotto" has attracted pilgrims in the hundreds of thousands and its environs have been modified and enhanced with rich Catholic symbols and buildings. For the past 90 plus years, the grotto shrine has offered a pilgrimage season with Sunday processions, rosaries, outdoor masses and dedicated Feast Day events which runs annually from early May until late September.

Statue of Mary at Carfin
Work on the Carfin version of the Lourdes Grotto began in the early 1920s.

The shrine was built, by hand, by local parishioners on a site opposite the St. Francis Xavier's parish Church. Many of the builders were coal miners from Carfin and neighbouring villages out of work during the 1921 Coal Miners' Strike. It is said that Fr. Taylor was aware of the need to keep these workers occupied to minimise the effects of unemployment on their morale.

Fr. Taylor inspired hard work and dedication from his workers.

Starting with a bare field in 1920, a frantic period of endeavour driven by the faith and zeal of the volunteers resulted in the shrine being largely complete within two years. It officially opened in 1922.

The grotto's central scene depicted Our Lady's appearance to Saint Bernadette in a bricked, terraced garden which included an altar for outdoor Mass, when the West of Scotland weather allowed. Canon Taylor's book of the shrine's first thirty years records over 300 volunteers working on the grotto in its first two decades. He also records a single pilgrimage of over fifty thousand pilgrims in 1924.

Growth and Development of the Shrine

Shrine of Our Lady of Fatima
The shrine opened in late 1922 and it quickly became a pilgrimage site for Catholics from across Scotland and the rest of the world. Services were held for the Polish and Lithuanian communities that had settled in Scotland. Hundreds of thousands of pilgrims of different faiths have visited Carfin.

The shrine expanded beyond a single field to many acres between 1922 and the 1960s. The grotto later added a Glass Chapel situated on a raised "Headland" above the main pilgrim walkway. The grotto grounds house many life-size depictions of Christ, Our Blessed Lady and many saints. It also contains a life-size representation of Jesus' life with Mary and Joseph in their Loretto house and carpentry shop, which is depicted in a cave; a Reliquary; as well as a sunken garden. Many holy statues and artifacts were added to the central Lourdes Grotto scene. Other depictions include the Way of the Cross, a large number of statues of Saints, and a statue honouring Our Lady, Star of the Sea, complete with miniature lakes.

On Sunday afternoons at 3pm, between May and October, Rosary processions are held. These are traditionally attended by thousands of visitors. The rosary is led by the parish priest, a tradition started by Fr. Taylor and carried on by his successor, Fr. George Mullen (later Canon George Mullen).

The priest would stand on the parapet of the Glass Chapel, from which a clear view could be obtained, both of the Grotto itself and of the movement of the procession along the shrine's gravel paths.

Each Sunday procession culminated in Benediction of the Blessed Sacrament in the upper Glass Chapel. Many local people remember the discomfort of kneeling in the gravel as children, at the moment of adoration in the Benediction service.

St. Thérèse of Lisieux
In addition to his devotion to Our Lady of Lourdes, Canon Taylor also admired Saint Thérèse of Lisieux, the "Little Flower". This admiration began during the Canon's visits to France where devotion to the Carmelite nun rose rapidly following her death in 1897. One catalyst for this growth was the posthumous publication of St. Thérèse's autobiography, "Story of A Soul". Canon Taylor was an acknowledged expert on the life and work of St. Thérèse and authored the first English translation of her autobiography in 1912.

He published subsequent articles in Catholic newspapers of the day to promote devotion to the little Carmelite nun of Lisieux throughout the United Kingdom.

Her enclosed life of devotion to Jesus and her "little way" to God attracted considerable admiration in Scotland, England and Ireland following these publications. Canon Taylor believed that St. Thérèse, a future Doctor of the Church, would become an important figure early in the new century. He also spoke to the Vatican Committee which considered St. Thérèse's cause for canonization and was present in Rome in 1925 when little Thérèse was proclaimed a Saint of the Church.

So, as a measure of his devotion to the Little Flower, the Canon added a statue of St. Thérèse directly across from that of Our Lady of Lourdes. The shrine's statue to St. Thérèse was erected within weeks of her beatification in Rome by Pope Pius XI on 29 April 1923, an event which the Canon attended.

The decision to erect the statue was controversial. Some pilgrims expressed the view that this "new" Saint's statue should not stand in such proximity to that of the Blessed Mother.

The Canon took the unusual step of collecting these opinions and sending copies to the Superior of the Carmelite convent in France where St. Thérèse had lived her vocational life.

The Mother Superior's advice was that the statue should remain in its location, and she predicted that the Carfin Lourdes Grotto would enjoy large numbers of pilgrims as a result.

St. Thérèse of Lisieux is the secondary patroness of the grotto after Our Lady.

By the time of Canon Taylor's death in 1963, the Carfin Lourdes Grotto enjoyed a high national profile and attracted tens of thousands of pilgrims annually. Among the many seasonal pilgrimages to the shrine, each May, First Communicants from surrounding diocesan parishes visited for procession, with lines of white-dressed girls and school-blazered boys.

Memorial to Black Madonna of Częstochowa
Following the 1988 Glasgow Garden Festival,[5] the glass chapel used at the event was relocated to Carfin Grotto, where it was placed near the arena of Our Lady, Star of the Sea in the lower garden area of the grotto. This building, the grotto's second Glass Chapel, was subsequently dedicated to the victims of the Lockerbie Disaster. Daily Mass is now celebrated in this glass chapel, now named Our Lady, Maid of the Seas after the ill-fated aircraft from Pan Am Flight 103, which crashed near the Scottish town of Lockerbie on 21 December 1988.

More recently, the Reliquary opened within the Grotto grounds and features many religious artifacts used throughout the years at various processions and celebrations.

Most recently, a new Pilgrimage Centre opened in 1997, featuring an exhibition of the history of different faiths and beliefs, as well as displaying various religious artifacts.