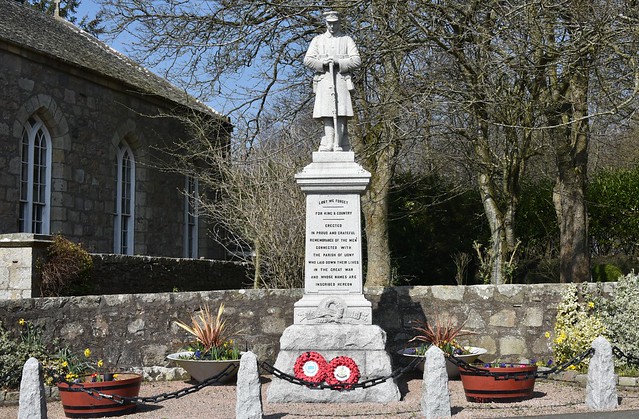 Udny War Memorial - Aberdeenshire Scotland - 15/4/2018
I passed through Udny on my way to Portsoy, I parked my car for twenty minutes or so to capture a few shots of this beautiful part of Scotland, bright sunshine and a warm breeze present I enjoyed my short visit.

I plan to revisit Udny sometime soon, hence a folder all to itself to archive my photos .

Udny Green is a village in Aberdeenshire, Scotland, immediately southwest of Pitmedden.It is part of the parish of Udny along with another small settlement, Udny Station.

Udny Parish Church is located beside the village green with the old kirkyard and Udny Mort House on the opposite side.

On 22 September 1943, the Royal Engineers were called out to Udny Castle to investigate reports of an unexploded bomb. It turned out to be a "flash bomb" used by the Luftwaffe at night to illuminate the area for navigation or photographic uses.

UDNY, a parish, in the district of Ellon, county of Aberdeen, 4 miles (E. by S.) from Old Meldrum; containing 1450 inhabitants. This place derived its name from the ancient family of Udny, who have held possession of the barony more than 5OO years, and whose descendant. Colonel Udny, is the present proprietor. The barony, and several portions of land in the parishes of Ellon, Tarves, Logie-Buchan, and Foveran, were erected into the present parish of Udny, by authority of an act of parliament passed for that purpose, in 1597. The parish is nearly circular in form, and comprises about 12,000 acres. Of this area, 8500 acres are arable, 400 woodland and plantations, and the remainder, of which a large portion might be reclaimed, moorland pasture and waste. The surface is gently undulated, and diversified with hills of moderate elevation: the prevailing scenery is of pleasing character. Three small streams, one of which bounds Udny on the north, and another on the south, flow in a direction from west to east, and after leaving the parish, fall into the river Ythan, about six miles distant.

The SOIL is principally a rich loam resting on a bed of granite, alternated with portions of inferior quality on a substratum of clay: the chief crops are oats, bear, barley, potatoes, and turnips, with the usual grasses; and vegetables and fruit of every kind are also raised in perfection. Husbandry has been greatly improved, and a due rotation of crops is in general observed. The lands have been drained, but from the insufficient depth of the drains, the full benefit of the process has not been yet produced. Much waste land has been brought into cultivation; and from the liberal encouragement given by the proprietors to their tenants, improvements are still being made.

The farm houses and offices are substantial and commodiously arranged. On the farms exceeding fifty acres in extent threshing mills have been erected; the inclosures are kept in good order, and all the more recent improvements in the construction of agricultural implements have been adopted. Great care is bestowed on the management of the dairy, and large quantities of butter and cheese of excellent quality are sent to the Aberdeen market. The cattle are in general the Aberdeenshire, which thrive well; but on some of the larger farms, cattle have been imported from Durham with a view of improving the breed. Few sheep are reared in the parish.

The plantations, nearly 300 acres of which are firs of various kinds, interspersed with other trees, are generally in a thriving state; and around the mansions of the principal proprietors are many fine specimens of wellgrown timber. Towards the end of the last century, the Mains of Udny was tastefully laid out in inclosures of about sixteen acres each, separated from each other by double rows of beech and elm: the inner rows were cut down about twenty years afterwards; but the outer rows, which have attained a maturity of growth, still add greatly to the beauty of the landscape. The principal substrata are granite and limestone, with alternations of grey slate; the limestone has been wrought at different times, but never to any very considerable extent, the works being discontinued from the irruption of water into the quarries.

The annual value of real property in the parish is £7431. Udny Castle, the ancient baronia residence of the Udny family, appears to have been erected about the close of the fifteenth century. It is a building of four stories, and the walls are of great thickness. The two lower stories, of which the upper contains a spacious hall comprising the whole length and breadth of the building, have groined ceilings of elegant design; and the floors are neatly paved with hexagonal slabs of granite.

The proprietor began to modernise the castle in 18Ol; but the design was not completed, and the mansion is at present uninhabited. Pittrichie, the property of Alexander Milne, Esq., is a handsome house of granite, built by the late proprietor in 1819; and another seat in the parish is Tillygreig, the property of Arthur Harvey, Esq., a small mansion lately enlarged.

At Pitmedden, the property of Sir W. C. Seton, Bart., are the ruins of two ancient mansions, and also an extensive garden, planted about the middle of the seventeenth century with the choicest fruit-trees of every kind, and tastefully laid out at a great expense. The garden is still in a flourishing condition, and the apples are said to be superior to any in the north of Scotland.

There is no village. Various handicraft trades are carried on in different parts, and the several shops for the sale of groceries and other articles for the supply of the inhabitants are distributed throughout the parish. A post-office, which has a daily delivery, has been established under that of Aberdeen; and there are several good inns. Fairs, chiefly for black-cattle, are held annually at the Green of Udny on the Tuesdays after the 25th of March and May, and the Tuesday after the 21st of November.

Facility of communication is maintained by turnpike-roads from Aberdeen and Newburgh, which intersect each other nearly in the centre of the parish; and by the turnpike-road from Aberdeen to Meldrum, which passes through the western portion.

There are parish roads kept in repair by statute labour; and good bridges over the streams. Ecclesiastically this place is within the limits of the presbytery of Ellon and synod of Aberdeen.

The minister's stipend is £217. 7. 2. with a manse, and a glebe valued at £10 per annum patron. Colonel Udny. The church, erected in 1521, is a substantial structure with a low spire, and contains 750 sittings. Udny parochial school is attended by about thirty children; the master has a salary of £32 with a house and garden, and the school-fees average £20