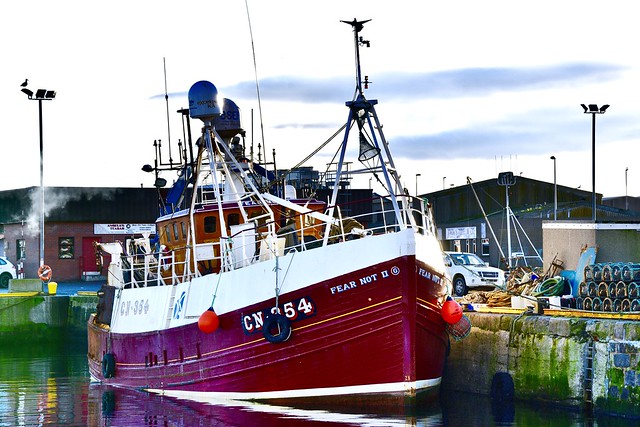 Fraserburgh Habour - Aberdeenshire Scotland - 13/11/2018
Bright sunshine on a beautiful Autumn day persuaded me to drive to Fraserburgh and re visit its magnificent fishing harbour for the first time in a few months, hence today Tuesday 13th November 2018 I visited and captured as many trawlers and scenes that I could, I had a great couple of hours.

Fraserburgh Harbour is situated in Aberdeenshire in the North East corner of Scotland and is ideally positioned for the fishing grounds of the North and East of Scotland, as well as being in close proximity to the North Sea oil and gas fields and the emerging offshore renewables market. The location also makes it well placed for trade with Scandinavia and the Baltic sea ports.

The Port caters and provides facilities for:

Fraserburgh Harbour Commissioners are committed to providing first class services to the fishing fleet. This commitment has been demonstrated over the years through deepening projects which have provided safe berthing facilities and two of the most up to date fish markets in the UK. Both markets, which are completely chilled, are capable of maintaining a temperature of +1ºC allowing landings of fish and nephrops over a 24 hour period, five days per week with the fish being kept in prime condition for the sales that take place at a later period. The markets cover 3100 square metres and can handle 6,000 boxes of fish daily. The very successful summer and autumn squid fishery takes place a few miles from the port and vessels often choose to land through Fraserburgh Fishmarket. A Wi-Fi internet connection was recently installed in the market and is available for all users.

The harbour houses a number of full time crab fishermen who operate throughout the year. The vast majority of crab landed is trucked to markets in England with the balance processed locally. Many of these smaller vessels also take part in the seasonal mackerel fishery with line mackerel also being landed and sold through the Fishmarket.

Fraserburgh Harbour is also home to a number of the large pelagic fishing vessels who class Fraserburgh Harbour as their “home” port. These vessels can be seen moored in the Balaclava basin between fishing seasons for mackerel, herring, blue whiting etc. The harbour and bay are designated and approved pelagic landing areas seeing large quantities of herring and mackerel landed during the season with demand coming from local processors as well as continental buyers. Catches can be landed direct into the Lunar Freezing factory, one of the most up to date and modernised processing factory in the country, which is located alongside the pier in the Balaclava Harbour. These catches can be landed either by lorry or by pipeline on specific berths straight into the factory.

Information on these can be obtained from the Harbour Office or from the Marine Watchtower.

Google and Wiki have the folowing info on this fine town.

It lies at the far northeast corner of Aberdeenshire, about 40 miles (64 km) north of Aberdeen, and 17 miles (27 km) north of Peterhead. It is the biggest shellfish port in Europe, landing over 12,000 tonnes in 2008, and is also a major white fish port and busy commercial harbour.

History
The name of the town means, literally, 'burgh of Fraser', after the Fraser family that bought the lands of Philorth in 1504 and thereafter brought about major improvement due to investment over the next century. Fraserburgh became a burgh of barony in 1546. By 1570, the Fraser family had built a castle (Fraserburgh Castle) at Kinnaird's Head and within a year the area church was built. By the 1590s the area known as Faithlie was developing a small harbour.

In 1592, Faithlie was renamed Fraserburgh by a charter of the Crown under King James VI. Sir Alexander Fraser was given permission to improve and govern the town as Lord Saltoun. At present this title is still in existence and is held by Flora Fraser, 20th Lady Saltoun and head of Clan Fraser. The Royal Charter also gave permission to build a college and university in Fraserburgh allowing the Lord Saltoun to appoint a rector, a principal, a sub-principal, and all the professors for teaching the different sciences.

A grant from the Scottish Parliament in 1595 allowed the first college building to be erected by Alexander Fraser, and in 1597 the General Assembly of the Church of Scotland recommended the Rev. Charles Ferme, then minister at the Old Parish, to be its first (and only) principal.

In 1601, Fraserburgh became a burgh of regality. The college, however, closed only a decade or so after Ferme's arrest on the orders of James VI for taking part in the 1605 General Assembly, being used again only for a short time in 1647 when King's College, Aberdeen temporarily relocated owing to an outbreak of plague. A plaque commemorating its existence may be seen on the exterior wall of the remains of the Alexandra Hotel in College Bounds.

Fraserburgh thereafter remained relatively quiet until 1787 when Fraserburgh Castle was converted to Kinnaird Head Lighthouse, Scotland's first mainland lighthouse. In 1803, the original 1571 church building was replaced and enlarged to seat 1000 people. The Auld Kirk was to be the standing authority in the town up until the 1840s.

The Statistical Account on the Parish of Fraserburgh, written between 1791–1799 (probably 1791) by Rev. Alexander Simpson of the Old Parish Church, shows that the population of Fraserburgh was growing with peaks due to seasonal employment. He records a population of about 2000 in 1780 of whom only 1000 resided in the town.

There was an additional population of 200 in the village of Broadsea. He makes a point of the arrival of Dr. Webster in Fraserburgh in 1755 claiming that the population then only stood at 1682. By the time the account was written the population had increased by 518 souls since 1755. Rev. Simpson also gives accounts of deaths, births and marriages. Between 1784-1791, he claims to have an average of 37 baptisms, 14 marriages and 19 deaths per year. The statistical account mentions activities with the harbour. He describes the harbour as small but good, telling that it had the capability to take vessels with '200 tons burden' at the time the account was written.

The account also mentions that Fraserburgh had tried and succeeded in shipbuilding especially after 1784. His account finishes speaking of a proposed enlargement of the harbour. He claims that the local people would willingly donate what they could afford but only if additional funding was provided by the Government and Royal Burghs.

The prosperity of the economy also brought about improvement within the town with a considerable amount of new houses being built in the town. The people were gaining from the herring industry as in real terms rent fell by 6% from 1815 to 1840. Lord Saltoun was described as the predominant land owner earning £2266,13s,4d in rents.

A railway station opened in 1865 and trains operated to Aberdeen via Maud and Dyce, as well as a short branch line to St. Combs. It was, however, closed to passengers in 1965 as part of the Beeching cuts, though freight trains continued to operate until 1979, after which the station site was redeveloped. Currently, the closest operating station is Inverurie, 56 km (35 miles) away.

Climate[
Fraserburgh has a marine climate heavily influenced by its proximity to the sea. As such summer highs and winter lows are heavily moderated, with very mild winter temperatures for a location so far north. The differences between seasons are very narrow as a result, with February averaging highs of 6.7 °C (44.1 °F) and August 17.2 °C (63.0 °F).[6] As a result of its marine influence, there is significant seasonal lag, with September being milder than June and October has slightly milder nights than May, in spite of a massive difference of daylight. The climate is overcast and wet with 1351.8 hours of sunshine. Temperature extremes have ranged from 26.6.C (July 1995) down to -14.4.C (February 1991) 747.7 millimetres (29.44 in) of precipitation per annum.
© All Rights Reserved
Tags: more » « less
Sets appears in:
Stats: 4,056 views
↑ top